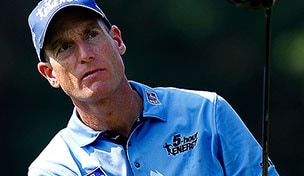 Jim Furyk has been named the golf ambassador for the Web.com Group. The 42-year-old began his career on the developmental circuit in 1993.

Furyk will play an active role in creating wide awareness for both Web.com and the Web.com Tour by wearing the Web.com logo on his shirt. His agreement runs through 2016.

“I’m excited to be part of the Web.com team and look forward to working together to help others learn about the company while bringing more visibility to the Web.com Tour,” Furyk said in a release.