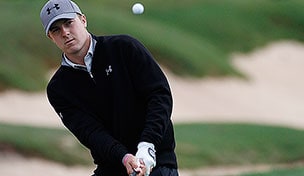 SAN ANTONIO – Playing in his first premier grouping on the PGA Tour, Jordan Spieth was a hole away from stealing the show.

In a share of the early lead at the Valero Texas Open, Spieth made a mess of the par-5 eighth hole (his 17th of the day), taking a triple-bogey 8 and settling for a 1-under 71, four shots behind leader Matt Bettencourt.

Even with the late miscue, the 19-year-old first-year pro outplayed his fellow playing competitors, world No. 2 Rory McIlroy (72) and ninth-ranked Matt Kuchar (74).

“Right after the round, yeah, I’m a little frustrated just because it was my 17th hole,” Spieth said afterward. “But all in all, all parts of my game feel great right now.”

And for good reason.

Spieth took only 25 putts during the opening round at TPC San Antonio, where morning temperatures barely crept above 50 degrees and the wind blew steadily at 20 mph.

It didn’t seem to trouble him early, as he ran off four birdies in a five-hole stretch around the turn, moving to 4 under for the day and a share of the lead. But he came unraveled on the 603-yard eighth.

When he first approached the tee box, Spieth thought that he would hit 3-wood, but changed his mind upon learning that the hole location on the massive, three-tiered green was all the way in the back.

Alas, his tee shot with the driver rode the wind and landed in a pile of cactuses wide right of the fairway. From there, it got ugly.

Spieth chunked his second shot, flipped the club over for his third shot and played it left-handed, then topped his fairway wood from the right rough, advancing the ball only 70 yards.

Now in the middle of the fairway, and still 284 yards away, he roped his sixth shot into the left rough and couldn’t get up-and-down. Triple bogey.

“But I’m going to take a lot of confidence from this. It was one bad swing, and this is a golf course where you just don’t want it to happen.”