Rose exhausted in even-par 72 on Day 3 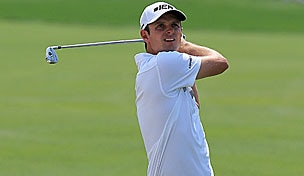 ORLANDO, Fla. – Maybe it was something he ate last night. Maybe he didn’t warm up or hydrate properly. Maybe it was the muggy afternoon heat in Central Florida, which topped out at 86 degrees.

Whatever it was, Justin Rose felt exhausted during the third round of the Arnold Palmer Invitational, and it showed Saturday as he tumbled down the leaderboard, turning a four-shot lead into a two-shot deficit.

“The energy disappointed big time,” he said after an adventurous even-par 72 at Bay Hill. “My legs went on me almost out there. I made some loose swings coming down the stretch and really trying to hang on to that.”

After a dream start – he went 4 under over his opening four holes, including an eagle on the par-5 fourth – Rose was four shots clear of the field. But he made five bogeys on his last 12 holes, coming home in 3-over 39 to finish at 9-under 207, two shots back of Tiger Woods.

“I just wanted to go out and play a good round of golf,” Rose said. “I wasn’t too worried whether I was two ahead or two behind. The real day is tomorrow.

“Obviously, you don’t want to give Tiger too many shots. The back nine was a shame, but today means nothing really until tomorrow plays out, so hopefully he doesn’t go get hot tomorrow and then today’s just a memory.”