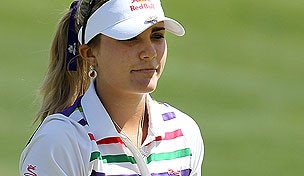 Getty Images
CLIFTON, NJ - MAY 16 : Michelle Wie hits her second shot on the 13th hole during the third round of the Sybase Classic presented by ShopRite at Upper Montclair Country Club on May 16, 2009 in Clifton, New Jersey. (Photo by Hunter Martin/Getty Images)  -

PALM BEACH GARDENS, Fla. – This golf rich community is about to get even richer with talent.

Lexi Thompson, the LPGA phenom who turned 18 last month, is looking to buy her first home in the Palm Beach Gardens area. In fact, the entire Thompson family is on their way here.

Two months ago, world No. 1 Rory McIlroy bought a home in Palm Beach Gardens. This last week, Lee Westwood moved into a new home at Old Palm Golf Club in this city. Tiger Woods lives in nearby Jupiter Island with Luke Donald, Dustin Johnson, Rickie Fowler, Keegan Bradley, Stacy Lewis and Michelle Wie all having homes in the area.

“Lexi wants to be near her brother, Nicholas,” said Judy Thompson, mother to Lexi and Nicholas.

The Thompsons are tight knit. Nicholas, who is playing in this week’s Honda Classic, got married in December with his father, Scott, as his best man. Lexi was a bridesmaid and brother Curtis, who plays at LSU, was a groomsman.

With Lexi playing the HSBC Women’s Champions in Singapore this week, Scott is accompanying her. Scott helped groom Lexi as her caddie but left her bag last year to help Nicholas win his PGA Tour card back through the Web.com Tour. Scott's not caddying this year.

“Nicholas was up at 2:30 in the morning after a round the other night so he could talk to his dad in Singapore,” Judy said. “That tells you a lot about their relationship.”

Lexi now lives with her parents in Coral Springs, Fla. Nicholas lived in the house he bought 500 yards from his parents’ home at TPC Eagle Trace but moved after his wedding. With Lexi looking to buy near Nicholas, Judy and Scott are planning to sell their long-time home and also move to the Palm Beach Gardens area.

Nicholas, Curtis and Lexi grew up playing golf together, and they’re looking to be able to keep the tradition going when their schedules allow.