Laird has omens going for him 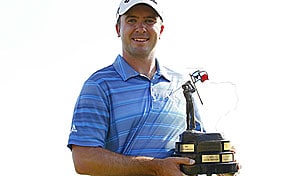 AUGUSTA, Ga. – If you subscribe to omens you may want to keep a close eye on Martin Laird this week.

Laird, the last man into this week’s field at Augusta National via his victory on Sunday at the Valero Texas Open, arrived in Georgia late Sunday on a flight chartered by the Texas Open.

He bunked the first night at a house rented by his management company that was being shared by 1988 Masters champion Sandy Lyle, who waited up for his Hambric Sports Management stablemate.

Here’s where it gets spooky. Lyle informed Laird that he also won the week before the Masters (at the Greater Greensboro Open) and went on to collect a green jacket the next week.

The foretokens didn’t stop there. Laird woke up on Monday and visited a local fast-food restaurant. He later learned that Lyle had eaten the exact same meal on the Monday before his victory in ’88 at Augusta National.