Second-round 70 is progress for McIlroy 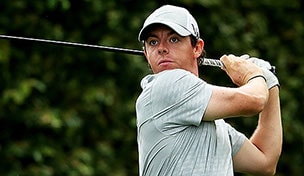 Getty Images
PEBBLE BEACH, CA - JUNE 18: Graeme McDowell of Northern Ireland waits on the eighth green as a pabbleboarder goes past during the second round of the 110th U.S. Open at Pebble Beach Golf Links on June 18, 2010 in Pebble Beach, California. (Photo by Jeff Gross/Getty Images)  -

AUGUSTA, Ga. – He may not be exactly where he wants to be, but for Rory McIlroy his second-round 70 is progress.

The world No. 2’s Friday card featured an eagle at the par-5 eighth when his 5-wood second shot from 275 yards nestled close to the hole, three birdies on the back nine and three bogeys.

“The eighth hole really got me going,” said McIlroy, who is tied for 14th at 2 under par and four strokes out of the lead. “Anything under par today was going to be a good score and I stayed patient out there when I needed to and it was a good day.”

It didn’t start out as a good day. The Ulsterman began his round in steady rain and was 2 over par after three holes and needed to convert lengthy par putts on his next four holes.

McIlroy entered the year’s first major with some much-needed momentum following his runner-up finish at last week’s Texas Open, but when he opened with a 72 on a benign scoring day it appeared he’d lost some momentum until he rallied midway through Friday’s round.

“I’m comfortable with my game and happy with my position going into the weekend,” McIlroy said.