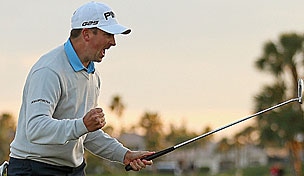 Getty Images
MANCHESTER, MA - JUNE 12: Rachel Jennings of Great Britain and Ireland reacts after landing in a bunker in Foursomes competition during the second day of the 2010 Curtis Cup Match at the Essex Country Club on June 12, 2010 in Manchester, Massachusetts. (Photo by Jim Rogash/Getty Images)  -

On another windswept day in South Florida, Michael Thompson dazzled with a few clutch up-and-downs, including a sand save on the last hole, en route to a two-shot victory Sunday at the Honda Classic. Here is the skinny on the final round at PGA National:

What it means: It’s the first career victory for Thompson, 27, whose previous best finish was a T-2 at last year’s U.S. Open, where he fired a final-round 67 at Olympic Club. Was he trending toward this maiden victory? Not exactly. In four starts this season, Thompson had three missed cuts and a tie for 78th, with just one FedEx Cup point and $10,919 in earnings. With this victory, Thompson pocketed $1.026 million.

Round of the day: Sure, there was much to like about the way Thompson (69) handled the difficult conditions on the back nine Sunday, but the round of the day belonged to Matt Jones, who rose 31 spots on the leaderboard with a 2-under 68.

Best of the rest: Only five players were under par Sunday, when the temperature plunged into the 50s and the wind gusted up to 25 mph. On the back nine, rookie Luke Guthrie moved to within two shots of the lead with five holes to play, but pumped his tee shot out of bounds on No. 14 to drop four shots behind. Later, Ogilvy reached the par-5 18th in two shots to pull within one shot of the lead as Thompson played the last hole.

Biggest disappointment: Chasing two unproven players at the top, Lee Westwood (74), Rickie Fowler (74), Keegan Bradley (71) and Justin Rose (71), among others, failed to mount any kind of challenge. Further down the leaderboard, and just as surprising, was Tiger Woods, who needed a final-hole eagle just to shoot 74 and finish T-37 – quite a stark contrast to his last appearance at PGA National, where he closed with a thrilling 62 to share second. “I just kept making too many penalties this week,” he said afterward.

Shot of the day: After a shaky start, Thompson buried a 49-foot eagle putt on the par-5 third hole to create a two-shot cushion. He never relinquished the lead. Honorable mention: Geoff Ogilvy’s improbable, hang-on-the-lip chip-in from behind the 16th green, sending him to a runner-up finish – his best result since September 2010.

Quote of the day: “All throughout the week I was just trying to find it in the dirt. It’s what we all do as pros. This week was just magical.” – Thompson