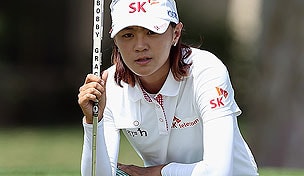 RANCHO MIRAGE, Calif. – Bruce Willis would have been proud.

Na Yeon Choi met the actor in a movie premier last week for the movie G.I. Joe: Retaliation at Hollywood’s Chinese Grauman Theater. In Thursday’s first round of the Kraft Nabisco, Choi was a co-star with Suzann Pettersen as the early first round leaders.

Choi and Pettersen both shot 4-under-par 68s while playing together. They both played bogey-free rounds, and they’re both trying to win their second majors. Choi won the U.S. Women’s Open last year. Pettersen won the LPGA Championship in ’07.

“I think I played well because Suzann played well,” Choi said. “We had a great round, and we motivated each other.”

There’s more than a second major championship title at stake for Choi. With a victory this week, Choi can become the eighth player to gain the Rolex world No. 1 ranking. She moves to the top spot with a win, provided current No. 1 Stacy Lewis finishes fourth or worse.

Pettersen has some strong history at Mission Hills. She was second three times in a four-year span between 2007-10. She was three shots ahead with four holes to play in ’07 and closed with a double bogey and bogey and watched Morgan Pressel get the trophy.

“I hope I know what I’m doing,” Pettersen said of playing the Dinah Shore Course. “It’s really just trying to go out there and literally trying to enjoy it, which is probably the hardest thing for me.

“I’ll never forget when Kathy Whitworth came up to me, I think it was ’09, and she shook my hand and said `Don’t ever let the passion get in my way.’ It’s really spot on.”

Choi, by the way, didn’t just attend the G.I. Joe premier. She met Willis and had her photo taken with him. She also went to the premier party where Willis and Korean actor Byung-hun Lee also attended.

Choi would like to stay atop the Kraft leaderboard this entire week.