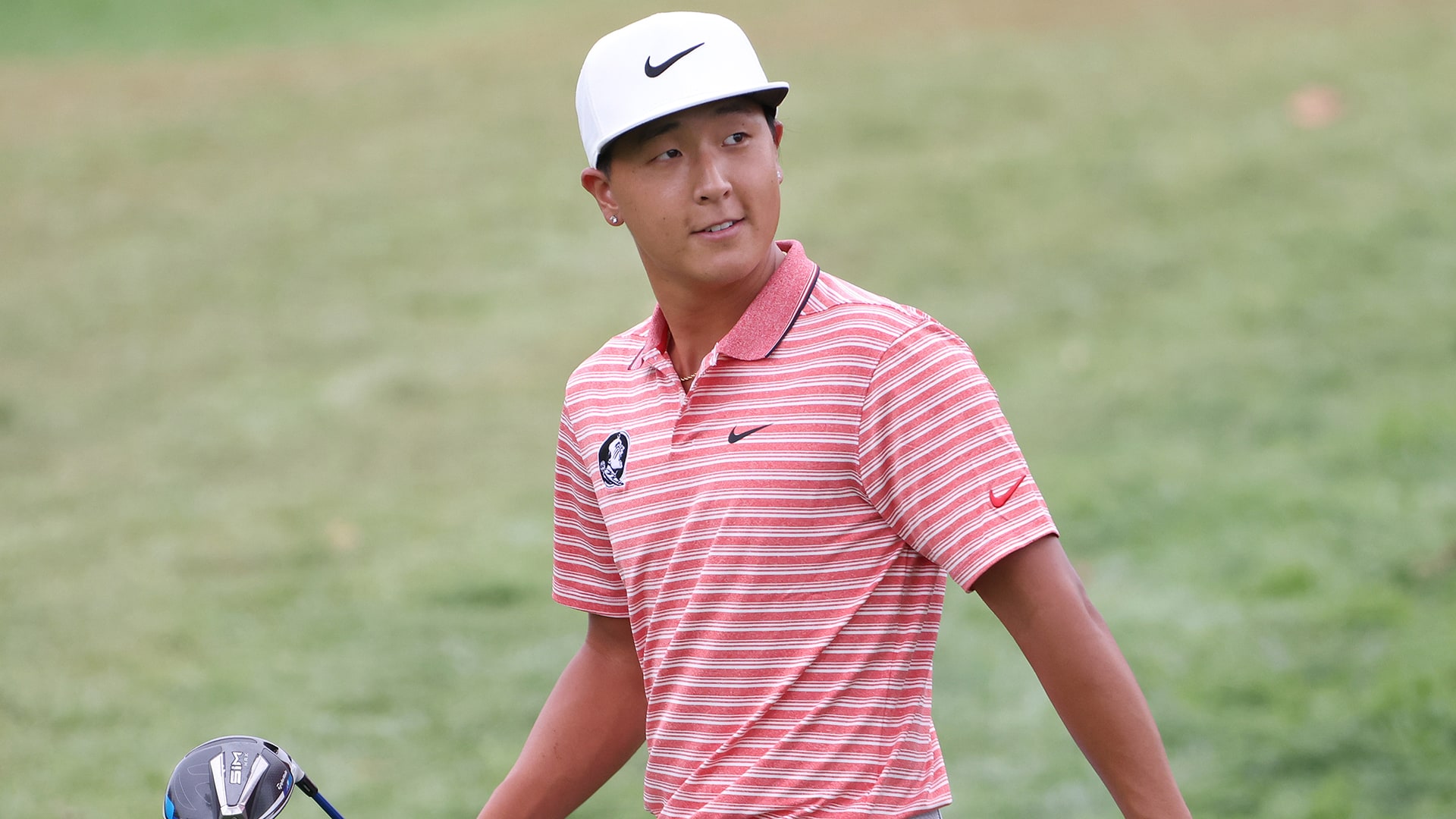 The top five teams and the top individual not on advancing teams in each regional move on to the NCAA Championship, which begins May 28 at Grayhawk Golf Club in Scottsdale, Arizona:

Here is everything you need to know from Day 1:

Round of the day: Florida State. A few weeks ago, the Seminoles lost a heartbreaker in the final match of the ACC Championship to Clemson. “Ever since then I’ve never had a team this focused every single day,” said Florida State head coach Trey Jones. On Monday, the host Seminoles celebrated the first competitive round on their new home golf course with a program-record, 17-under 271. Three players are tied for fifth for Florida State, including Cole Anderson, who was inserted into the lineup after missing ACCs, and senior transfer Vincent Norrman. Senior standout John Pak, meanwhile, is in a share of second at 5 under. Pak is two weeks removed from playing in the Walker Cup, where he also battled a stomach virus and had to miss the first session. Jones said when Pak returned to campus last Monday afternoon, he was given the option of taking a few days off. Instead, Pak headed straight for afternoon workouts and was standing on the first tee the next morning for practice. “His energy level is really high and it’s hard to get him to slow down a little bit,” Jones said. Other than a late double bogey at No. 16, Pak looks to be full speed ahead.

Biggest surprise: Ohio State. Talk about finishing strong. The Buckeyes were 4 over through nine holes after starting the day on No. 10 but rallied with an 8-under front nine by its four counters, who combined to make just two bogeys and a double in their final nine holes on Monday.

Work to do: LSU. The fourth-seeded Tigers, who are coming off a T-2 showing in stroke play at the SEC Championship, began their day with No. 5 player Chris Woollam holing out for eagle on the par-4 10th hole. However, LSU finished the day 20 shots off the first-round pace and with no players inside the top 25 individually.

Round of the day: Texas. On a rainy day in Indiana, the Longhorns were sailing, shooting 17 under through 14 holes and opening up a double-digit lead. However, all five Texas players went birdie-less and combined to go 16 over on the final four holes and lead by just three shots after Round 1. Sophomore Mason Nome closed in double-triple-double-bogey after holding a share of the lead with four to play. Fellow sophomore Travis Vick does lead, at 4 under, after an opening 68, while junior Pierceson Coody is T-4, two shots back.

Biggest surprise: UNCW. In their first competitive round since April 3, the ninth-seeded Seahawks are just two shots outside of the top 5. Blake McShea’s 2-under 60 led the way for UNCW, which had to withdraw from the Colonial Athletic Association Championship because of COVID-19 protocols. The No. 9 seed is the best regional seeding in program history.

Work to do: Duke. With the top five seeds all inside of the top 5, there aren’t many teams out of their expected position after 18 holes, though the Blue Devils, the No. 8 seed, sit 11th at 17 over, 17 shots back of fifth-place Louisville. No Duke player is inside of the top 40 individually.

Rounds of the day: North Carolina State and Kent State. The Wolfpack, four-time winners this spring and the No. 2 seed, were led by their top two players, senior Ben Shipp (69) and sophomore Max Steinlechner (66), who have combined for 11 top-10s this spring. The Golden Flashes, more than a few seeds lower at No. 8, got the biggest contributions from their Nos. 3 and 5 guys, Chris Vandette (68) and Will Kurtz (67).

Biggest surprise: Houston. The Cougars, ninth or worse in four of their six spring events, didn’t get to play their conference championship because of COVID-19 protocols, but they’re making up for it so far. Led by a 67 from Andrew Gibson, all four Houston counters shot under par on the front nine, their second nine.

Work to do: Clemson. It wasn’t a good start by the top seed, which is trying to send retiring head coach Larry Penley out on a high note. The Tigers got just two birdies and an eagle from their counting players on the back nine. Turk Pettit’s 70 was Clemson’s only round under par on Monday. Asked what his team struggled with, Penley responded: “Everything. ...  We just couldn't make any birdies.”

Round of the day: Oregon State. It was an up-and-down spring for the Beavers, who looked great at events like the Amer Ari (T-3) and Duck Invitational (won) yet not so great at Bandon Dunes (ninth) and Pac-12s (sixth). But none of that matters now, as Oregon State, the No. 7 seed, has three individuals in the top 10 and leads its regional by two shots. Sophomore Jackson Lake birdied five of his last seven holes to shoot 68 while seniors Shawn Lu and Spencer Tibbitts each carded 69. “No two shots are attached to one another,” said Oregon State head coach Jon Reehorn. “… There's a long way to go still. We need to get back in the same mindset tomorrow that we are starting over at zero and keep going about our own business.”

Biggest surprise: Nevada. In a loaded regional, the 10th-seeded Wolfpack led during Monday’s opening round before falling back into a share of fifth. Sam Meek (67) and Brendan MacDougall (70) are each inside the top 10 for Nevada, which hasn’t qualified for the NCAA Championship since 2006.

Work to do: Oklahoma. “We didn't play very well today,” said Sooners head coach Ryan Hybl, who attributed his team’s struggles on Monday to lack of scoring on the easy holes. Oklahoma’s four counters were just a combined 3 under on the par-5s. “We didn't go score on the easy holes,” Hybl added. “… If we had, it could've righted a lot of the wrong, but we didn't. We still have a lot of golf left, and that's what I told our team.” Jonathan Brightwell, the senior All-America transfer from UNCG, leads individually after shooting 6-under 66, a round that included six birdies on his first seven holes. However, fellow seniors Garett Reband and Quade Cummins, both also fighting for top-5 spots in PGA Tour U, are T-57 and T-65, respectively, after 18 holes.

Rounds of the day: Wake Forest and San Francisco. After an 0-4 performance for Great Britain and Ireland at the Walker Cup, Wake sophomore Alex Fitzpatrick shot 4-under 67 and is in solo third for the top-seeded Demon Deacons, who also got a 68 from senior Parker Gillam. The Dons, the No. 5 seed, saw a familiar performance from senior Tim Widing (68), but they also had another Swede, the junior Paulsson, make two eagles and card 66. San Francisco has never made it to nationals as a team, coming closest in 2012, when it finished seventh.

Work to do: Arizona. Third-seeded Florida being T-8 despite a 68 from Ricky Castillo is slightly concerning, but four spots down the leaderboard and 11 shots back of the top five are the fourth-seeded Wildcats, who made just 13 birdies as a team on Monday (to their credit, though, they also didn’t make anything worse than bogey, either).

Round of the day: Oklahoma State. With inclement weather in the forecast this week, teams set off Monday in hopes of playing as many holes as they could. All of them got in 36, including the top-seeded Cowboys, who followed a disappointing even-par 288 with a scorching 17-under 271 on their home golf course to take a two-shot lead over Illinois. Oklahoma State head coach Alan Bratton subbed in Brian Stark between rounds for Jonas Baumgartner, and Stark responded with a 7-under 65 that was bookended by eagles at Nos. 1 and 18. Bo Jin also fired a second-round 65 for the Cowboys and is solo third individually. He’s joined in the top 10 by teammates Austin Eckroat (T-7) and Eugenio Chacarra (T-7).

Biggest surprise: Northwestern. One of the last teams in the field, the 11th-seeded Wildcats are in the top five through two rounds. Senior Eric McIntosh’s 69-71 day paced Northwestern.

Work to do: Auburn. Paced by a 3-under 69 from senior Jovan Rebula, the Tigers, the No. 3 seed, were in third after Round 1. However, Rebula made a 14 on the par-4 eighth hole in the afternoon and shot 82 (he also leads the field with 13 birdies) to not count for Auburn, which as a team was seven shots worse in the second round. Auburn was a national semifinalist at Karsten Creek in 2018.

*36 holes were completed on Monday because of impending inclement weather; final round is slated to begin at 11 a.m. ET on Tuesday 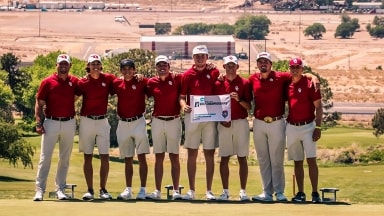 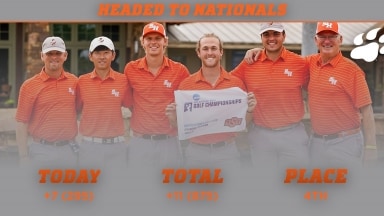