No. 1 McIlroy, No. 2 Woods ousted from Match Play 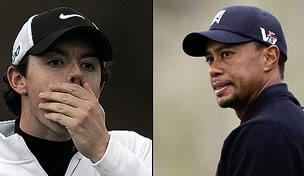 MARANA, Ariz. – It was another desert, another championship, another continent but as day turned quickly into night on Thursday the WGC-Accenture Match Play Championship felt eerily similar to last month’s Abu Dhabi HSBC Golf Championship.

All that was missing was a bizarre rules snafu and last-minute putter switch, but even those distinctions faded to darkness as the worst-case scenario became reality. For the first time in over a decade the top two seeded players won’t see the second round.

For world No. 1 Rory McIlroy it was a 1-up decision to mate Shane Lowry and another short work week that brings his year-to-date total of competitive rounds to three. While No. 2 Tiger Woods failed to make it to Friday at the Match Play for the fourth consecutive year following a 2-and-1 twilight loss to Charles Howell III.

Cue the concerns about match play’s capricious ways – one-and-done is too volatile, too Draconian, too, well, this.

Not that either Woods or McIlroy had any interest in taking shelter in the bracket busting format.

“I played well, I really did, I hit a lot of good shots out there,” said Woods, who was bounced in Round 1 for the third time in 13 Match Play appearances. “I didn’t make a bogey out there. Unfortunately it’s the nature of the format, and I’m not advancing.”

And the Match Play now has a dangerously thin marquee for the duration.

“That’s 18-hole match play, you have to get off to a fast start and you have to play well to win,” said McIlroy, who endured a round-one bounce for the first time in his young career.

Yet as volatile as match play can be, “Black Thursday” was not exactly a Gonzaga/Princeton upset special. Although technically upsets, neither player expected the competitive equivalent of a first-round bye.

McIlroy had played enough golf with Lowry to know what awaited; in fact the two had dinner on Tuesday night at famed Lil Abner’s steakhouse, so when the two battled to a draw through 11 holes there were no alarms.

But then match play happened at the par-3 12th when Lowry flew the green with his tee shot and dropped a chip for birdie and his first lead of the day. The Ulsterman was running uphill the rest of the way.

For Woods that momentum haymaker arrived in near darkness when Howell charged in a 23-footer for birdie at the 16th hole and Woods failed to convert from 11 feet.

No one was more surprised than Howell.

“I still kept waiting for that Tiger moment,” Howell conceded even after he’d built a 2-up advantage.

Through countless practice rounds when the two were members at central Florida’s Isleworth Country Club, yearly bouts in the Tavistock Cup and all the way back to a third-round tilt at the 1996 U.S. Amateur, as best he could remember Howell had never clipped the guy in the red shirt in a head-to-head duel.

But on Thursday as players and officials raced daylight in an attempt to make up for Wednesday’s white-out that dumped nearly 4 inches of snow on the Dove Mountain layout, that “Tiger moment” never arrived.

“It's part of the getting beat by him so many times, yeah, you're just waiting for it.  It's kind of like a whipped dog; you know it's coming,” said Howell, who has climbed from 117th in the world rfanking to 66th thanks to a solid start to 2013. “It caught me off guard that he missed the putt on 16. I really thought he would make that one. That's in his wheelhouse.”

But then this season began with out-of-character performances by both of the game’s leading men when Woods missed the cut in his debut in Abu Dhabi following a two-stroke penalty that resulted from an incorrect drop and McIlroy made a mess of his Nike Golf debut with rounds of 75-75 and an embarrassing return to his old Scotty Cameron putter for Round 2 in the Middle East.

Woods recovered to win his second start at Torrey Pines; the jury is still out on McIlroy who headed back down Dove Mountain not sounding anything like a player who is on an 0-for-2 schneid.

“I’m hitting the ball so much better off the tee, which is a huge positive,” said McIlroy, whose next start is the Honda Classic. “I’m more comfortable with everything around the greens.”

Perhaps, McIlroy has proven adept at avoiding panic attacks when things aren’t going his way. Maybe the fix for both superstars is warm south Florida skies and 72 holes of stroke play. But that reality wasn’t going to make things any easier on the Match Play marquee.