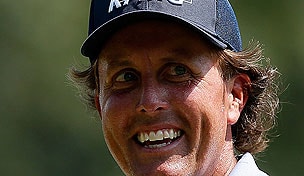 LA QUINTA, Calif. – It wasn’t without a bit of late drama, but Phil Mickelson ensured Saturday that at least one of golf’s biggest stars will finish a tournament this week.

Mickelson was one shot inside the cut line at the Humana Challenge as he played the back nine on the Palmer Course at PGA West. He had closed with birdies on Nos. 16 and 17, but his 227-yard approach into the par-5 18th came in too hot, ran through the back of the green, and trickled into the pond. Lefty managed to get up-and-down to shoot 66 and finish at 11-under 205 – 11 shots behind leader Scott Stallings.

Save for a few swings, Mickelson has rounded into form after a sloppy 72 Thursday at La Quinta, generally considered the most difficult venue of the three-course rotation. On Friday, Lefty had a 5-under 67 that could have been lower, and he got off to a hot start in the third round, birdieing three of the first four holes to charge up the leaderboard.

Still, Mickelson found himself one shot adrift of the cut line as he played the closing stretch on the Palmer Course. He stuffed his approach on the 16th to 2 feet, then holed an 11-footer for birdie on the dangerous 17th to ensure that he’d be around for the final day – which at least is more than Tiger Woods and Rory McIlroy can say.