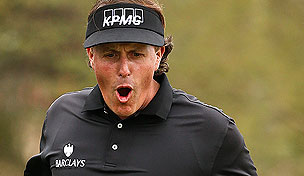 Getty Images
NORTON, MA - SEPTEMBER 06: Brandt Snedeker tees off on the sixth hole during the final round of the Deutsche Bank Championship at TPC Boston on September 6, 2010 in Norton, Massachusetts. (Photo by Michael Cohen/Getty Images)  -

With the PGA Tour scoring record in sight, Phil Mickelson instead found himself holding off one of his hard-charging playing competitors Sunday at the Waste Management Phoenix Open.

Mickelson capped a near-historic week at TPC Scottsdale with a final-round 67, going wire-to-wire to win his 41st PGA Tour event. At 28-under 256, Mickelson finished four shots ahead of Brandt Snedeker (65).

“I hit a lot of good shots today,” Mickelson said. “I just did what I had to do to win. That’s all I cared about.”

Entering the final round, the only drama was whether Mickelson, at 24-under 189 through three rounds, would shoot a final-round 64 to break the 72-hole scoring record of 254, set by Tommy Armour III in 2003.

Of course, Mickelson never really threatened that record after getting off to a rocky start. He managed only two birdies on the opening nine, turning in 1-under 34, but tacked on insurance birdies at Nos. 13, 15 and 17.

“It’s been a year (since the last victory), so you want it bad, you know guys will be making moves behind you,” he said. “I had to get control of my thoughts after the first few holes.”

This victory was forged during the opening round Thursday, when Mickelson needed to birdie one of the last two holes to shoot 59. But on the final hole, and 25 feet from history, his birdie putt cruelly spun around the entire cup and lipped out. He settled for a 60 and a four-shot lead after Day 1.

He was nearly as impressive in the second round, save for a watery double bogey on the last hole that cost him a shot at the 36-hole scoring record. After a Saturday 64, Mickelson was staked to a six-shot lead.

With the victory here, Mickelson will move to No. 10 in the world, when the new rankings are released Monday. He entered this week at No. 22.

“I was nervous heading into today’s round,” he said. “It means a lot to get into the winner’s circle.”