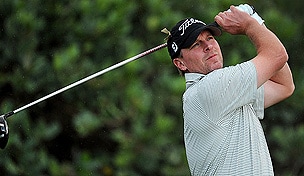 Getty Images
TURIN, ITALY - MAY 06: 14 years old Domenico Geminiani of Italy during the first round of the BMW Italian Open at Royal Park I Roveri on May 6, 2010 in Turin, Italy. (Photo by Stuart Franklin/Getty Images)  -

With the Florida swing now in the rear-view mirror, the PGA Tour heads to Texas for a pair of events before the season's first major. This week, the spotlight shines upon Houston, where Redstone Golf Club plays host to the Shell Houston Open.

Hunter Mahan returns to defend the title he won last year by a stroke over Carl Pettersson. Here are 10 players to watch this week in the Lone Star State:

1. Steve Stricker: Each of his first three starts this season have resulted in top-five finishes, and there's reason to think that streak will continue this week. Stricker has four top-11 finishes in his last six Houston starts, including a tie for fourth in 2011.

2. Keegan Bradley: Bradley enters off a tie for third at Bay Hill, his third straight top-10 finish. He's currently seventh on Tour in total driving and eighth in scrambling, and just a year ago finished tied for fourth in his second appearance at Redstone.

3. Phil Mickelson: A champion here in 2011, Mickelson also finished T-4 here last year. Despite the missed cut at Bay Hill, Lefty won in Phoenix and was T-3 at Doral, and tends to thrive on courses like Redstone that demand deft touch on and around the greens.

4. Hunter Mahan: Mahan has not won since leaving Redstone with the trophy a year ago, but his play this year has been strong, with seven straight top-25 finishes. In addition to his win last year, Mahan has four other top-11 finishes in Houston dating back to 2006.

5. Louis Oosthuizen: A year ago, the South African used a T-3 finish here as a springboard to his playoff appearance at Augusta. He was also T-16 here in 2011, and despite recent struggles he has the ball-striking prowess to contend this week at Redstone.

6. Jimmy Walker: One of the hottest players still under the radar, Walker notched his third top-10 finish of the year at Bay Hill and has been inside the top 30 in seven of eight starts this season. The Texas resident has made 17 straight cuts and is currently seventh on Tour in scoring average.

7. Rory McIlroy: Freshly stripped of his top ranking, McIlroy is making his final start before the Masters. Though his struggles this year are well-documented, his last competitive round - a Sunday 65 at Doral - gives reason to think a return to form is near.

8. Lee Westwood: Though he only has one top-10 finish in six starts this season, Westwood has played well in Houston recently. The Englishman has finished inside the top 30 each of the last four years, including a T-8 finish in 2010.

9. Bryce Molder: Molder has been strikingly consistent this season, with six top-30 finishes in seven starts. Though he's still in search of his first top-10 this year, he was T-18 in Houston last year and T-8 in 2010. Molder currently ranks fifth on Tour in strokes gained putting and ninth in birdie average.

10. Brandt Snedeker: Snedeker had a rough return to action last week, missing the cut at Bay Hill in his first start in over a month. Any course that requires players to lean heavily upon their short game, though, puts the reigning FedEx Cup champ among the short list of players expected to contend.