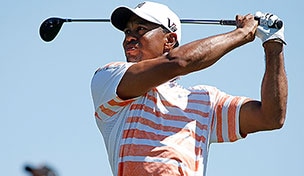 Tiger Woods can reclaim the No. 1 spot in the world ranking this week for the first time in 2 ½ years, which seems an ideal time to reflect.

According to a report Sunday by the Scotsman, Haney, who stopped working with Woods in 2010, said that Woods has looked even better this season than he did last year, when the current world No. 2 won three times and was on the first page of the leaderboard in three of the four majors.

“Tiger is playing much better this season,” Haney said, according to the report. “His distance control with the wedges has improved tremendously since last year, a fact evidenced by the fact that he made a lot of birdies from inside 100 yards (at Doral).”

That victory in south Florida gave Woods his fifth victory in the last year, more than any other player during that stretch. If he wins again this week at Bay Hill, where he already has seven career titles, he will become world No. 1 for the first time since October 2009.

Even if Woods assumes that lofty perch once again, Haney still expressed some doubt in his play off the tee.

“Because of the distance so many of the professionals now hit the ball, a lot of them are benefiting from not having to hit many drivers,” Haney said, according to the report. “Tiger is definitely one of those players.”

Haney went on to say that Woods has almost entirely eliminated the “left-side miss,” which for any player “is a great confidence boost.”

At Doral, Woods took a career-low 100 putts en route to a two-shot victory over Steve Stricker, the man who (now somewhat infamously) gave him a putting tip on Wednesday of tournament week.

Haney told the Scotsman that years ago, Woods’ former caddie Steve Williams would say that if Woods required fewer than 120 putts, he would win.

That’s not the case anymore, of course, and it showed at Doral. Even with a career-best week on the greens, Woods won by only two shots.

Bay Hill represents Woods’ final start before the Masters, where he is currently listed as a 4-to-1 favorite to win for the first time since 2005.

“It’s all about the majors for Tiger,” Haney said, according to the report. “For any player, victory in any of the four means matching a good ball-striking week with a good putting week. In the past, the ball-striking part was a given for Tiger. And it looks like he is approaching that level again.”