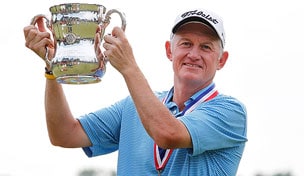 LAKE ORION, Mich. – Roger Chapman earned the right to be mentioned in the same sentence with Jack Nicklaus, Gary Player and Hale Irwin.

Not bad for a self-described former European Tour journeyman.

The Englishman shot a 4-under 66 on Sunday to win the U.S. Senior Open by two strokes at 10 under at Indianwood. He won the Senior PGA Championship by the same margin two months ago on the other side of Michigan.

Chapman, Nicklaus, Player and Irwin are the only players to win the U.S. Senior Open and Senior PGA Championship in the same year.

Before this year, his career highlight was a European Tour win in Brazil in 2000.

Bernhard Langer (72), Fred Funk (67), Tom Lehman (68) and Corey Pavin (68) finished tied for second at 8-under 272 at the Champions Tour's fourth of five majors. Pavin's two-stroke penalty after his first round for hitting a ball that moved a fraction of an inch proved to be costly.

Entering the final round, it seemed as if the only lingering question was how easily Langer would win.

Langer, though, found out what the first- and second-round leaders – Tom Kite and Lance Ten Broeck – did the previous two days: It's not easy to stay consistent at Indianwood.

Langer took a four-shot lead into the final round and closed with a shaky performance that spoiled his shot at winning his second U.S. Senior Open.

The German said Saturday if he closed with a 2- or 3-under round, it would be difficult for anyone to catch him. When Langer gave up two shots at No. 2, he gave the field a chance to pass him.

Langer pushed his second tee shot to the right under a line of trees on the 396-yard, par-4 second hole. After walking more than 100 yards to examine the path of his approach shot, he hit a low shot that landed against the lip of a greenside bunker. Langer tried to play what he called a ''special shot,'' and ended up sailing it over the green to set up a double bogey.

''I knew there was a lot of golf left and I was still in the lead,'' he said. ''If I shoot under par from that point on, I'll still be in good shape, but I couldn't make a putt.''

The wind picked up considerably Sunday - with gusts up to 20 mph - and made it even tougher to keep tee shots on the unforgiving and tight fairways and to accurately approach hard, undulating greens.

Chapman answered the challenge for much of the day with two birdies on the front nine and four through 14 holes. He chunked a shot out of the bunker at 16, leading to a bogey that he made up for on the next hole.

The 53-year-old Chapman stepped to the potentially pivotal 195-yard, par-3 17th and calmly hit a 5-iron shot that was close enough for a tap-in birdie that restored a two-shot lead.

''I have to say that was my best shot ever played,'' he said.

Chapman chose to use his driver at the 462-yard, par-4 18th and got a break when his tee shot was stopped by fans standing along the left ropes. That gave him with a decent lie in the rough that he took advantage of with an approach that set him up for a two-putt par that sealed the victory and proved what he did in May at Harbor Shores was no fluke.

''I wanted to prove to myself and to other people that Benton Harbor wasn't a one-off event,'' he said. ''That was in the back of my mind.''

He had a stunning wire-to-wire win at the Senior PGA Championship, beating John Cook by two strokes after closing with two bogeys without his wife, Cathy, there to watch because she had to work.

Chapman's wife was with him at Indianwood and gave him a huge hug as he walked off the 18th green and tears started streaming down his sweaty cheeks.

Player was the first to win the U.S. Senior Open and Senior PGA Championship in the same year back in 1987, Nicklaus did it in 1991 and Irwin pulled off the feat in 1998.

Until Chapman's breakout this year, his shining moment was beating Padraig Harrington in a playoff for his first European Tour win in his 472nd start on that tour.

He had a conditional exemption on the Champions Tour in 2010 and lost his status last year, finishing 84th on the money list less than $90,000 after failing to crack the top 10 in any of his 11 starts.

''I guess when you read about him, you always hear journeyman or something like that,'' Pavin said. ''But he's always been a very solid player.