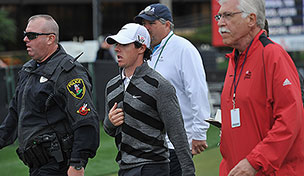 PALM BEACH GARDENS, Fla. – Among the many conspiracy theories sprouting up in regard to Rory McIlroy’s withdrawal from the Honda Classic on Friday, at least one can easily be dismissed.

There’s been some sentiment that an elite player could withdraw from a tournament in order to protect his Official World Golf Ranking status, but that isn’t the case.

Instead, a mid-round withdrawal – such as the one from McIlroy after playing eight holes – is treated just like a missed cut. The tournament counts as a start, but the player receives zero world ranking points for the week.

McIlroy is currently No. 1 in the world with 11.66 average points, almost three more than second-ranked Tiger Woods. He has held the top spot on the ranking since winning last year’s PGA Championship.

This issue similarly made headlines 51 weeks ago, when Woods withdrew from the final round of the WGC-CA Championship after 11 holes.