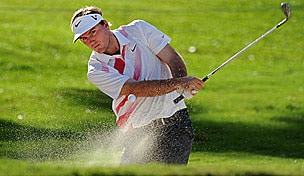 This time, he was competing alongside them in the big leagues – and the familiarity certainly helped.

In the first round of his rookie season, Henley posted a 7-under 63 to claim second place at the Sony Open, behind only Langley on the leaderboard.

“I think there were a lot of nerves for me the first few holes, and I think playing with Scotty and Luke was huge for me,” the University of Georgia product said. “Watching them play well kind of gave me a goal to try to keep up with them, so it was definitely fun feeding off them.”

Henley posted eight birdies at Waialae Country Club on Thursday, but it was hardly his first taste of professional success. Two years ago, he won a Web.com Tour event while still an amateur, and last year he won twice to easily claim his Tour card.