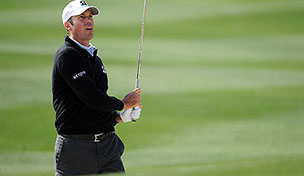 MARANA, Ariz. – For Matt Kuchar, Dove Mountain is starting to feel a lot like Medinah. On Friday, the American outdueled Sergio Garcia, 2 and 1, to advance to a third-round bout with Nicolas Colsaerts. The only thing missing was Rory McIlroy’s police escort and rabid fans.

Well, that and the Ryder Cup. But forgive Kuchar if he’s starting to feel a little patriotic.

In fact, his third-round match against Colsaerts will be a sequel of sorts following his Saturday four-ball match against the Belgian and Paul Lawrie at last September’s Ryder Cup. Kuchar and Dustin Johnson won that bout, 1 up, but the “Muscles from Brussels” left an impression.

“I remember it was kind of fun watching DJ as my partner and watching those two go at it,” smiled Kuchar, who pulled away from Garcia on Friday with a birdie at No. 14 and closed out the match with an approach to 2 ½ feet at the 17th hole.

Colsaerts’ match against Justin Rose wasn’t nearly that close after building a 2-up lead through nine holes and finishing the match with three consecutive 3s for a 4-and-2 victory.

“I knew that match play, when you play somebody of the stature of Justin, it can always go very fast one way or the other,” he said. “I played pretty good the last couple of holes and made sure this game wasn't really going to go too far.”