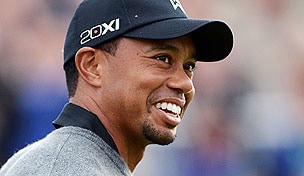 Getty Images
FARMINGDALE, NY - JUNE 21: Ryan Moore hits from the rough on the second hole during the continuation of the third round of the 109th U.S. Open on the Black Course at Bethpage State Park on June 21, 2009 in Farmingdale, New York. (Photo by Chris McGrath/Getty Images)  -

DORAL, Fla. – When Tiger Woods began the season in Abu Dhabi one of the things he said he focused on during the off-season was his short game, the byproduct of not having to spend as much time refining his full swing with coach Sean Foley.

Some have suggested Woods is closing in on the point of “owning” his new action, although Foley dismissed that idea and suggested that it is simply a better understanding of what they have been working on.

Video: Tiger sheds light on McIlroy, being No. 1

“When they said that (Ben) Hogan and Moe Norman owned their swing, who said that? Who made that up?” Foley said. “Did he say he owned it or was he trying to? I see a lot less of the old patterns there, but he’s just been doing it more and his touch is much better.”

Foley characterized the work he does with Woods now as more fine tuning with a focus on the same two things they have been practicing for about eight months. He also said he can see an improvement in the world No. 2’s short game over the last year, pointing out he finished fourth in scrambling on the PGA Tour last year compared to 141st in 2011, 166th in ’10.

“I don’t know how much time he’s practicing his short game, I know he’s in his back yard a lot working on it and you can see it when he’s doing it on the golf course,” Foley said following Woods’ nine-hole practice round on Wednesday at Doral.