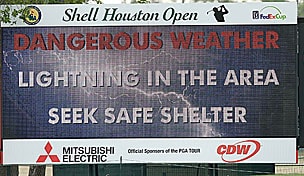 HUMBLE, Texas – In the PGA Tour’s version of Groundhog Day, the final round of the Shell Houston Open was suspended on Sunday afternoon because of dangerous conditions.

The delay came at 3:52 p.m. local time, with heavy thunderstorms targeted for the area. D.A. Points was leading by a stroke at 16 under on the 15th hole, while Henrik Stenson was the clubhouse leader one shot further back.

This is the seventh weather-delayed tournament of the 2013 season. Other reasons for delays have been wind, fog, frost, darkness, hail/sleet/snow and thunderstorms. Two tournaments – the Farmers Insurance Open and Arnold Palmer Invitational – were postponed to Monday finishes.

Play resumed at 7:30 p.m. ET. Twelve players need to complete their rounds and the final pairing had four holes remaining.