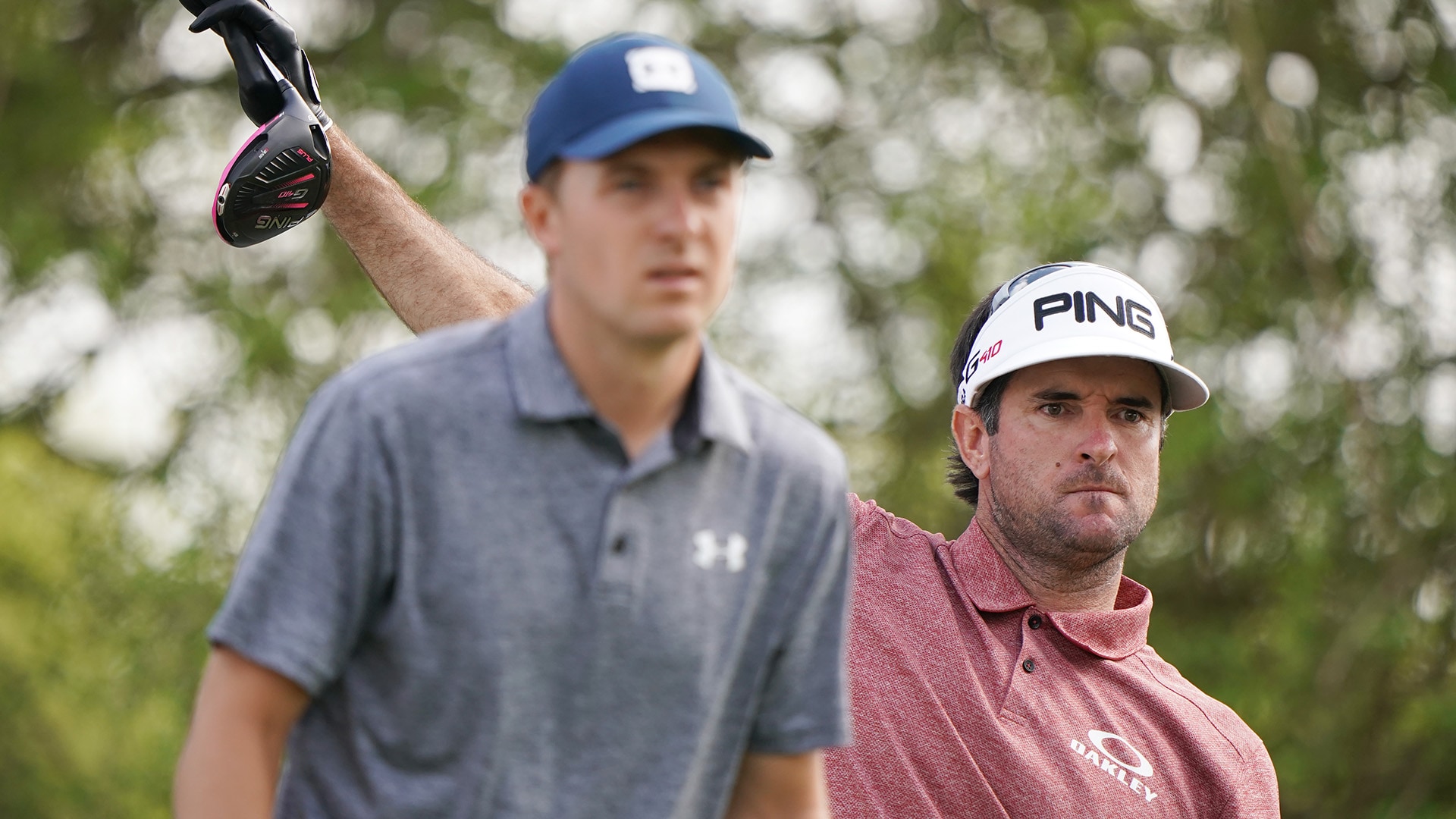 Woods’ playing competitor for the day, Watson was standing a few spots over on the range.

“What am I, like seventh alternate?” Watson continued. “Everybody’s falling down. … I might just hop on the plane, just to be safe.”

As one can imagine, there were more than a few Presidents Cup-themed jokes during the pair’s second round together at the Hero World Challenge.

“This is the stuff I have to listen to,” Woods quipped aloud at one point during the round.

Watson, 41, has been a part of six Cup teams – two of the Presidents variety – and most recently represented Team USA at last year’s Ryder Cup in Paris. He is also an aspiring captain, serving as an assistant at Hazeltine and expressing last year that he wanted to “serve” for Woods at the 2019 Presidents Cup.

“I have been bugging Mr. Tiger Woods about being a vice captain for Australia,” Watson told the Associated Press last December at this very event.

A year later, however, Watson, who at No. 41 in the world rankings is mired in a prolonged slump, won’t be boarding the U.S. team charter Saturday evening with Woods and the 11 team members who are in the field this week – not as a player, not as an assistant captain.

Neither will a few other Hero participants: Americans Kevin Kisner, Jordan Spieth, Chez Reavie were in decent running for a captain’s pick before being passed over.

“To me, it's weird because it feels like the team event should have already happened, and then we're playing this event,” Spieth said. “It's like I know the guys are leaving, but when it's being played without being there, that will be where I'll probably be like, man, I took it for granted.”

Spieth, 26, figured to be part of every U.S. team for decades when he made his debut in 2013 at Muirfield Village and two years later won two majors as part of a historic season. But at No. 44 in the world, Spieth was left off this year’s Presidents Cup squad as he continues to search for that elite form from a few years ago.

It’s slowly coming back, Spieth said, and the light at the end of tunnel is getting bigger, but that still won’t keep him from heading back to the States while his buddies are in Australia.

“I'm sure next week will be tough for me at home,” Spieth said. “I'll try and honestly just get away while the tournament's going on because you never want to miss those events when you've kind of been a part of them for a number of years.”

Call it professional golf’s version of “F.O.M.O.” No American player, once they get a taste of team competition, wants to miss out on another chance to represent their country – and, of course, the group texts.

“The best part about being part of the team is now you’re in this brotherhood,” said Patrick Reed, who this year needed a pick for the first time since qualifying for the 2014 Ryder Cup.

Added Rickie Fowler, who was briefly left off this year’s team before getting the call to replace the injured Brooks Koepka: “Just knowing what goes on as far as the group texts with the guys and everyone giving each other a hard time or just going back and forth, talking about what's going on that week, whether it's scheduling or which guys are playing with who or what are your potentials. Yeah, thinking about all that, you don't want to be left out.

“But that's also the motivation to go ahead and make it on points. … It just makes you push harder because, for me, knowing what goes on and what the team events are about, you want to be a part of it.”

Spieth, who recently spent some time in Jupiter, Florida, taking part in some friendly fourball competitions with Woods, Fowler and some other U.S. team members, now knows that feeling.

“I'll certainly work my butt off to not miss one of these again,” Spieth said.

Watson, at age 41 and seemingly further away from rediscovering his Cup-worthy game than ever, appears more motivated to captain.

Asked why he didn’t get an assistant nod from Woods, Watson answered indirectly.

“I’d be vice captain any time they ask me,” said Watson, who apparently wasn’t asked this time around. “Doesn’t matter, it would be on my schedule. I’d be like, ‘Hey, wherever we have to fly to, I’ll tell my kids, 'I’ll see y’all in a week.’”

Watson then elaborated on his views of the captain-selection process, lauding the “old days” when captains were picked based off of merit and how he perceives the criteria has changed.

“Now, when they start picking, and it’s the pods and all these things of like the vice-captains-are-always-the-same kind of deal, it takes away from some of the legacy of it, of being a great champion and now we’re going to honor you with the captaincy,” Watson said. “Now, it’s TV ratings and trying to get the right people in there that are going to get the TV ratings and everything, which don’t get me wrong, Tiger is a pretty good captain; I think he earned his right. Don’t get me wrong, I think everybody that’s been picked has earned their right, but it used to be a different feel to it when they picked you.”

Regardless of his opinions, Watson will be staying up to cheer on his buddies.

Or he may just sneak into the charter plane’s cargo hold.

“There's plenty of room down there,” Woods joked. “It might be a little cold, but I guess he can suck it up.”