'State of the Game' opinions vary on anchoring 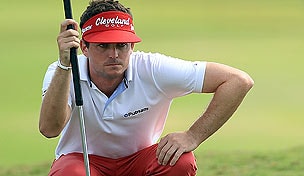 Getty Images
RIVIERA MAYA, MEXICO - MARCH 01: Dean Wilson chips out of a bunker on the third hole during the final round of the Mayakoba Golf Classic on March 1, 2009 at El Camaleon Golf Club in Riviera Maya, Mexico. (Photo by Chris Graythen/Getty Images)  -

As reports circulated Friday that the PGA Tour is planning to formally oppose a ban on anchored putting strokes proposed last year by the U.S. Golf Association and the Royal & Ancient, the 'State of the Game' panelists offered differing viewpoints on one of golf's most polarizing subject.

Golf Channel analyst Frank Nobilo highlighted the rising role of equipment manufacturers, one that may ultimately have an impact on exactly how far a proposed ban may reach.

'This used to be a manufacturer-supported game, and now it's a manufacturer-driven game,' he explained. 'I think most people agree that this was wrong 30 or 40 years ago, that they should have done something about it and they didn't.'

'I was the first guy to win with a putter up the arm, which is going to be legal if they keep it the way it is now,' he commented. 'I did feel like it was not in the spirit of the game. I felt like I probably shouldn't have been doing it even though it was legal.'

As the topic of bifurcation arose, where different rules would be in place at the amateur level than the professional one, Miller made clear he felt it would not be an easy fix to the situation.

'People say that the best thing about golf is it's governed by one set of rules. That's an opinion, that's not a fact,' he explained. 'I promise you, nobody quits golf because two different sets of rules govern it. But lots of people will come to the game because they are allowed to play with equipment that makes it more fun.'