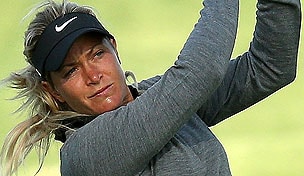 RANCHO MIRAGE, Calif. – Jodi Ewart Shadoff isn't letting her relative inexperience in the Kraft Nabisco Championship get in her way.

The 24-year-old from England, playing for just the second time in the LPGA's first major of the season, shot a 4-under-par 68 Thursday to grab a share of the lead after the first round.

Anna Nordqvist and Amy Yang are a stroke behind, with 11 players tied for sixth at Mission Hills Country Club's Dinah Shore Tournament Course.

Ewart Shadoff, who was married in January, finished tied for 26th last year in the Kraft Nabisco.

'I've been playing really consistently the last three or four tournaments, so I knew like my game is right there,' Ewart Shadoff said. 'I knew I was due to have a really good round.'

Ewart Shadoff held the lead with three holes to play, but she missed a 3-foot par-saving putt on No. 16 to drop a shot. It was her second bogey of the round. She missed a 40-foot birdie try on the par-5 18th hole that would have given her back sole possession of the lead.

'I played really consistently, got into a really good birdie train in the middle of my round, which was nice,' Ewart Shadoff said. 'I was just hitting a lot of greens and making putts, so I'm happy with how I'm playing and excited to get out there again.'

Choi and Pettersen played in the same group and both had bogey-free rounds. However, it took the duo a few holes to get comfortable. Choi made the first birdie, rolling in a 30-foot putt on her fifth hole, No. 14. Pettersen made her first birdie two holes later.

'After I made that putt, I got good momentum from there and I got good confidence,' Choi said. 'I thought like I needed to play more aggressively.'

Both players got to 3 under by the turn, with Choi making birdies on two of the last three holes on their first nine. Pettersen tied Choi on No. 18, after making her third consecutive birdie.

'The course is perfect, greens are rolling pure,' Pettersen said.

Each was able to make only one birdie on the second nine.

Several other players flirted with either tying the leaders or overtaking them, but miscues down the stretch quelled their chances.

Nordqvist was at 3 under par with four holes to play, but she bogeyed her 15th hole before grabbing a birdie on her 18th.

Giulia Sergas of Italy was also 3 under before making two bogeys in three holes on the back nine. She wound up shooting 70.

Golfers in the morning had an advantage, as afternoon winds made the course more challenging. Choi and Pettersen were among 10 players out of the top 14 who started in the morning.

Another advantage for Choi and Pettersen over Ewart Shadoff is experience at this event. Choi has two top-10 finishes in five years, while Pettersen has been the runner-up here three times.

'I hope I know what I'm doing,' Pettersen said. 'That would help. It's really just try and go out there and literally try to enjoy it, which is probably the hardest thing for me.'

Pettersen did get some valuable advice from LPGA Hall of Fame member Kathy Whitworth a few years ago.

'I'll never forget when she came up to me, I think it was 2009,' Pettersen said. 'She shook my hand and said, 'Don't ever let the passion get in my way.' It's really spot on. Just need to get up there and hit the shots that I'm seeing.'