Can it be the old Tiger is back? 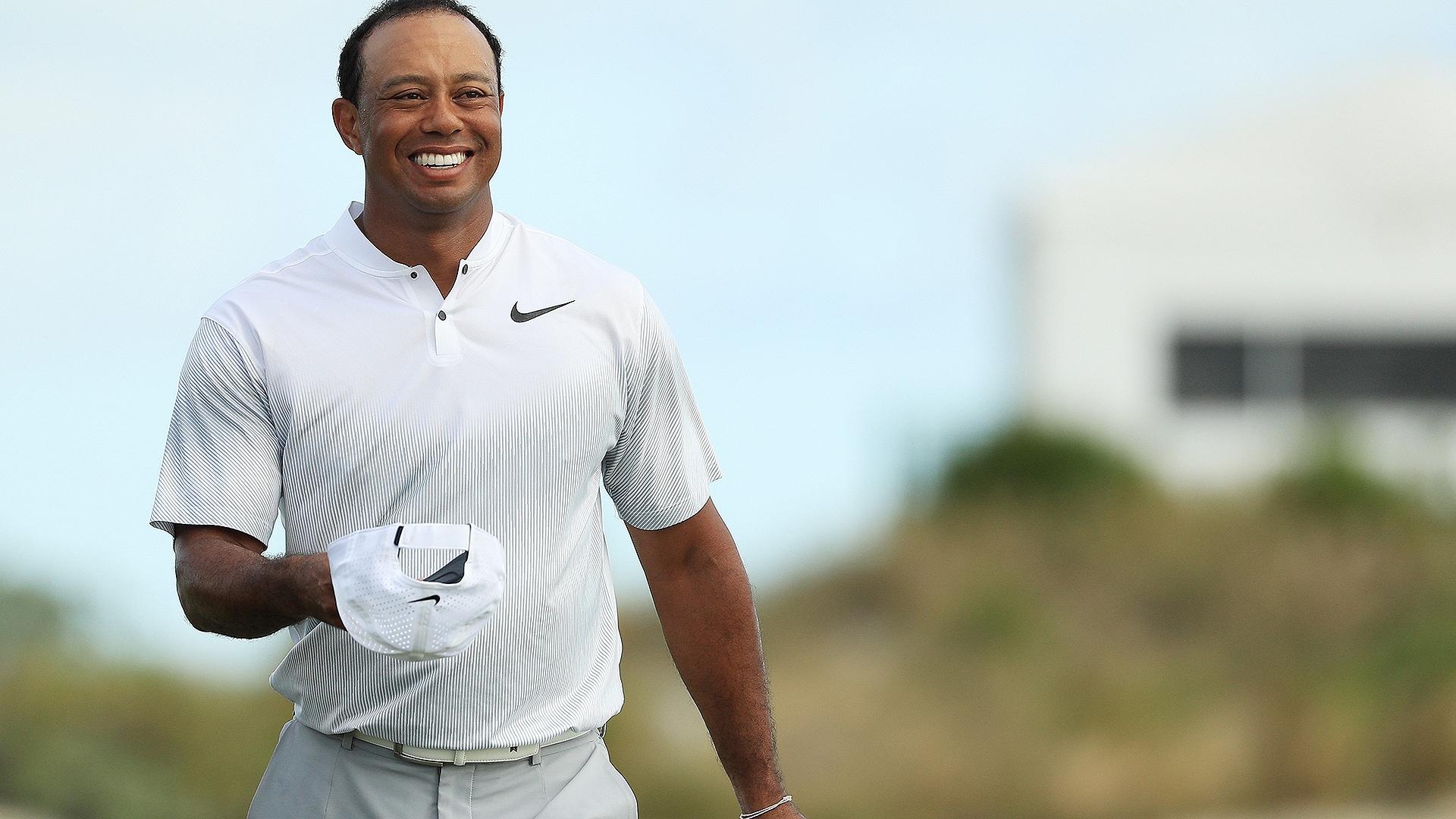 NASSAU, Bahamas – Throughout the course of his storied career Tiger Woods has answered to countless qualifiers.

Polarizing. From time to time, sure.

But the classification that stands out this week is something altogether new – coy.

From the moment the golf world turned its eye to Albany and this week’s Hero World Challenge, Woods has soft-peddled his chances, the byproduct, no doubt, of four back procedures and fusion surgery in April.

Having been down this painful road so many times in his career, it’s perfectly understandable that Woods would downplay his chances of contending this week.

Following Friday’s 68, which felt much more like a 63, he can no longer duck and cover behind his one-day-at-a-time mantra. That notion collapsed when Woods rolled in an 18-footer for eagle at the ninth hole to take solo possession of the lead.

So much for lowered expectations.

Woods cooled on his inward loop with bogeys at Nos. 12 and 18 to finish in a tie for fifth place, five strokes behind front-runner Charley Hoffman.

Although there are still 36 holes remaining and a star-studded and accomplished field standing between Woods and the storybook finish he’s tried so desperately to distance himself from, there was no ignoring the buzz Tiger’s Friday charge created at Albany and beyond.

Fans cheered, social media surged with speculation and even those who should be shuttered off from the frenzy took notice.

Patrick Reed was finishing his round two groups in front of Woods when he glanced at the leaderboard coming down the 18th hole. It was hard to miss and harder to ignore.

“It's never a good thing when he's ahead of you because just watching the highlights of him in his prime when he has any kind of lead going into Sunday, I think it's like 93 or 94 percent he wins the golf tournament,” Reed reasoned. “I would hate to ruin that percentage.”

It’s worth pointing out that just four days earlier Reed pined for the glory days of Woods and a chance to compete against his idol at something even approaching 100 percent.

Even Justin Thomas, the reigning PGA Tour Player of the Year, got into the act. Having spent as much time as anyone with Woods in recent weeks, Thomas echoed the thoughts of many in his generation when asked about Tiger’s return following 10 months of competitive inactivity.

“I'm probably just as excited to watch it as you are,” Thomas said. “I just get a front row seat to it on Thursday, but I'm also looking forward to trying to kick his ass, to be perfectly honest.”

The line was delivered with a smile and laugh. There is no lack of respect for Woods among the current crop of world-beaters. In fact, on Thursday Tiger credited the group’s collective engagement in recent months for helping him through the recovery process.

Still, this week has been defined by a sense of the unknown. How would Woods play? Could he compete against the likes of Justin, Dustin, Brooks and Jordan? As those answers seem to slowly crystalize, the vibe is starting to feel a little different.

Ernie Els knows the feeling. He endured Tiger’s best for the better part of two decades and he has the scars to prove it. On Thursday, Els – who designed the Albany layout – had a message that the current generation should seriously contemplate.

“It was a hard thing for me, a little better for him,” said Els during the Golf Channel broadcast when asked about competing against Woods in his prime. “I would love to see him play, half, let’s say past half, as close as he was against these youngsters and see what happens.”

That scenario suddenly seems closer to reality than it did just 48 hours ago. There is rust, as evidenced by Woods’ wayward drive into the dunes at the 18th hole that led to bogey, and his pace on the greens on Day 2 was suspect, but there’s still no ignoring his position on the leaderboard or his play this week.

There’s been a narrative in recent months that even if Woods returned to competition and was pain-free, which has always been the ultimate arbiter of his competitive fate, that he no longer held sway over his competitive counterparts the way he once did. Whether that notion holds true depends on the next 36 holes and beyond, but Woods’ former swing coach Hank Haney offered an interesting take on the subject.

“We will see what all these people say about how Tiger doesn’t scare anyone anymore if he plays like this, he didn’t scare people to victory, he played way better than them,” Haney tweeted on Friday.

“As I told you guys earlier this week, I didn't know what to expect because I hadn't played, I hadn't competed, I haven't had a fused back before in my life,” Woods said. “These are all new things.”

There is certainly plenty of uncovered ground this week, from a new back, a new outlook and maybe even a new, slightly more controlled swing; but there’s no denying that this is starting to feel so familiar.