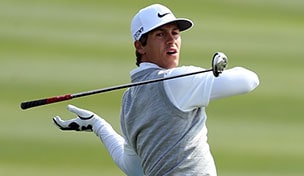 AUGUSTA, Ga. – Thorbjorn Olesen has arrived in Georgia for the year’s first major championship. That’s the good news. The bad news is he will probably not be at full strength when play gets underway on Thursday.

Olesen withdrew from last week’s Shell Houston Open with whiplash following a car crash and was limited to hitting short iron shots for most of last week. The 23-year-old played just nine holes on Friday at Royal Oaks Country Club in Dallas before traveling to Georgia on Saturday.

“The doctor said there would be no long-term damage. He’s just going to be a little rusty,” said Olesen’s manager Rocky Hambric. “I’m pretty confident he will play, but he’s basically had 10 days off without being able to practice.”

Olesen planned to practice on Sunday at Augusta National and has been undergoing therapy the last two weeks, including electric stimulation.