TT postscript: Drive for show, putt like a schmo

PARAMUS, N.J. –  Here are some things I think I think after I saw Tiger Woods putt like me for four days at The Northern Trust. He shot a final-round 70 to end the tournament at 4 under par at Ridgewood Country Club:

• I could almost take a copy of my report from yesterday and just repost it today. The story remained the same: driving was awesome, putting was not.

• On Saturday, we started with the good, so let’s start with the bad, just to mix it up. It was maddening to watch Tiger miss putt after putt after putt for the fourth straight day. Although his final number of putts was 28 on Sunday, he missed so many that were makeable. Now, you don’t expect to make them all (well, Tiger probably does), but making some would’ve been nice. The ones from 6 feet on five, 9 feet on 11 and 12 feet on 18 are the ones that come to mind first. But there were another six from around that 18- 20-foot range that didn’t drop.

• The biggest frustration for the putts not falling was momentum. No one has ever played on momentum as much as Tiger. So, when one, then two, then three putts don’t fall, he knows he’s on the wrong side of it.

“That’s what you’re seeing is that I’m close and just one shot here, one shot there, per day, flips momentum,” he said. “It’s just looking for one shot a day here and there, and you just never know when that shot may come.”

• The driving, again, was beautiful. He hit nine of 14 greens and the misses, other than the par-5 13th, were never by much. This has been something that Tiger fans have to be excited about. His performance on Saturday was great, but it may have been even better on Sunday.

The shaft change earlier in the week may have been the missing piece of the puzzle. He’s not swinging it as hard and he’s not hitting the ball quite as far but position is more important, and he’s swinging free and easy. It’s great to watch and will be interesting to see how the next month unfolds.

The putting will come around. He’s had great putting rounds most of the year. The driving was a welcome surprise and something that will work for him in any situation, if he can keep it up.

“I didn’t make any birdies this week,” he said, meaning many instead of any, because he made nine. “I didn’t putt well and at the end of the day, I found a piece of my game that has been missing, which is driving it well, but you have to make putts. That’s the only way you’re going to shoot low rounds.”

• The missed cuts at Genesis and the U.S. Open aside, this will be the second-worst finish from Tiger this year. Only a 55th-place tie at Wells Fargo will be worse.

• What’s next? Tiger was heading home to spend some time with his kids before heading back up to Boston later in the week for the Dell Technologies Championship at TPC Boston, a place where he won in 2006.

“I haven’t been there in years, so I’m looking forward to getting up there and playing,” he said. “Try and take a look at the golf course and have a good time.”

The tournament begins Friday and ends on Labor Day Monday. The following day, in Philadelphia, U.S. Ryder Cup captain Jim Furyk will make the first three of his four captain's picks. Can’t imagine him not announcing Tiger Woods at that point. 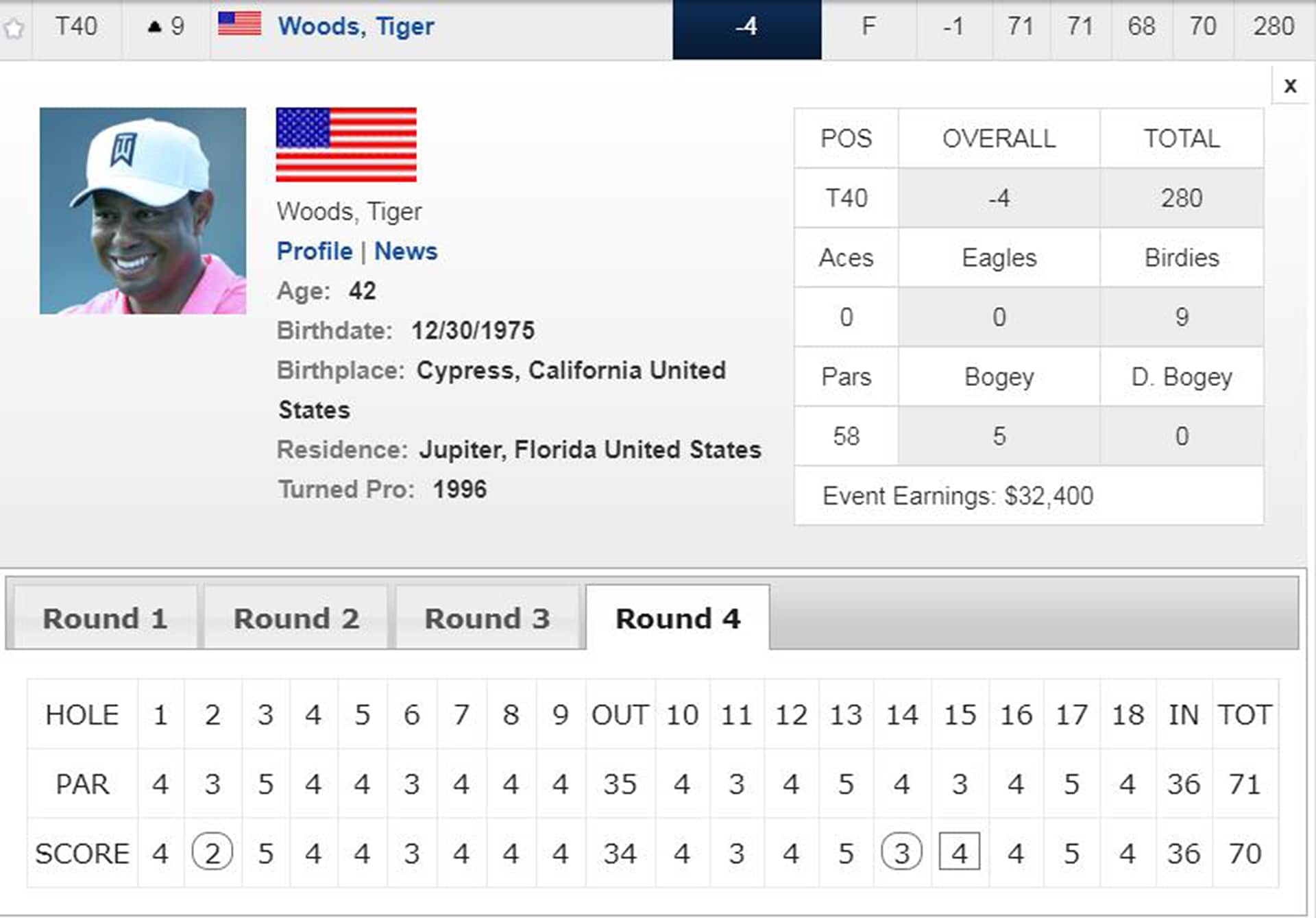