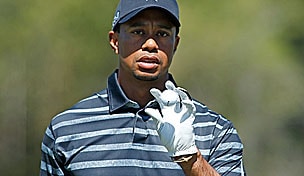 DORAL, Fla. – Although he hit just half of his fairways on a benign day by Doral standards, Tiger Woods found himself atop the leaderboard thanks to a hot putter that yielded nine birdies at the WGC-Cadillac Championship.

Woods finished with a 6-under 66 and is tied with Sergio Garcia, Graeme McDowell and Freddie Jacobson for the lead.

Woods’ effort was even more impressive considering he managed just one par through his first five holes and yet was even par. For the day, he hit seven of 14 fairways, 13 of 18 greens in regulation and needed just 23 putts, including two lengthy birdie putts at Nos. 4 and 16.

“Whatever he says, I'm going to do. He's one of the best putters that's ever lived,” Woods said. “He got me into the same posture that I was at Torrey. I had gotten off a little bit. So I felt comfortable, basically just like I did at Torrey, and I started rolling it just like I did then.”

Stricker said he notices Woods’ full swing posture works its way into his putting stroke, and his grip becomes a little strong. When he left Woods on Wednesday, Woods seemed more comfortable with his stroke.

“I told him last night, if you put me on your payroll, I could play a little bit less,” Stricker smiled.