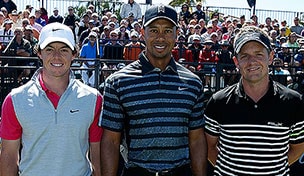 DORAL, Fla. – Tiger Woods applauded the practice of pairing of the world’s top three players together for the first two days at the WGC-Cadillac Championship, pointing out he played more than a decade on the PGA Tour before he was grouped into the game’s ultimate three-ball.

“The first time for my entire career that it ever happened was the 2008 U.S. Open,” said Woods, who played Rounds 1 and 2 at Torrey Pines with Phil Mickelson and Adam Scott. “Usually the top two players are always on the opposite end of the draw, so that never happens. To be able to have an opportunity like this, it's fun for us.”