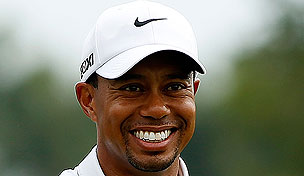 Nothing stirs the masses quite like a Tiger Woods victory, which helps explain why on Monday morning he checked in as a 4/1 favorite to win The Masters.

This, however, is a hype-free zone. It’s safe here. Just the facts.

But in the wake of Woods’ commanding performance at Doral, this is indisputable: This is the eighth time that Woods will enter the Masters with at least two wins on the PGA Tour. And the only year in which he did not go on to win a major was 2003.

Already a two-time winner this season, and with one more scheduled start before the Masters (Bay Hill), here is how Woods has fared at the year’s first major with similar credentials:

When Woods did not win a Tour event before the Masters: Zero green jackets

That’s right – if Tiger doesn’t have a win under his belt heading into Augusta, which was the case in 1998, 2010 and 2011, then he hasn’t won there. Not that he’s played poorly there, mind you. He didn’t finish outside the top 8 at the Masters in those three years.

When Woods won one Tour event before the Masters: Two green jackets

Twice Tiger has turned an early-season win into another victory at the year’s first major: In 1997, he captured the season-opening Tournament of Champions before winning at Augusta, and in 2002, he triumphed at the Arnold Palmer Invitational before slipping into the green jacket. The years that Tiger has won once before the Masters: 1997, '99, 2002, '04, '09 and '12.

Those predicting a Woods victory at Augusta undoubtedly will point to 2005, when Tiger won at Torrey Pines and Doral, then won the Masters a few weeks later. (Sound familiar?) He also made the Masters his third victory of the season in 2001, after previous victories that year at Bay Hill and The Players. The years that Tiger has won twice before the Masters: 2001, '05, '06, '07, '13 (with one start remaining).

Interestingly, Tiger has never won the Masters after winning three times in the run-up to Augusta. He came closest to making the Masters his fourth victory of the season in 2008, when he finished runner-up to Trevor Immelman. He was fifth in 2000, while tying for 15th in ’03.