Woods returns to No. 1 after API victory 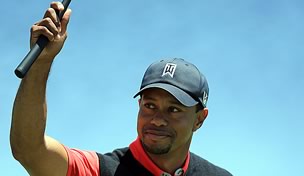 ORLANDO, Fla. – There is a new No. 1 player in the Official World Golf Rankings.

It’s the same guy who has held the spot for 623 weeks.

With his third PGA Tour title of the season Monday at the Arnold Palmer Invitational, Tiger Woods supplanted Rory McIlroy as the top-ranked player in world ranking. It’s the first time that Woods has held the top spot since Oct. 30, 2010.

There were even more shakeups for the rest of the top 10.

By finishing second to Woods at Bay Hill, Rose jumped from fifth to a career-high third in the latest rankings. Luke Donald slipped to fourth, while Brandt Snedeker dropped to No. 5.

Also notable was the rise of Keegan Bradley, who jumped from 14th to 10th, which is the highest-ever ranking for the 2011 PGA champion.

This week offers the last chance for players to clinch a Masters berth. The top 50 as of next Sunday earn a spot at Augusta National. Currently, Geoff Ogilvy is the bubble boy at No. 50, though Freddie Jacobson (46) and Richard Sterne (48) also held steady inside the top 50 with one week to go.