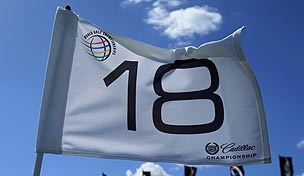 Having hosted the WGC-Cadillac Championship since 2007, Trump Doral will continue to host the season's second World Golf Championship event through 2023, the PGA Tour announced Friday.

The resort, which has held a Tour event on its premises each year since 1962, was purchased by real-estate mogul Donald Trump last June, and plans are in place for a $200 million renovation of the property, which features five different golf courses. Included in those plans is a redesign of the TPC Blue Monster Course by noted architect Gil Hanse, which will begin after next month's tournament.

'It is a great honor to have such a long-term extension with the PGA Tour,' noted Trump. 'They know how great this facility will become. It will be the finest anywhere in the United States.'

This year's event will be staged March 7-10, with Justin Rose returning to Miami to defend the title he won a season ago by one shot over Bubba Watson.