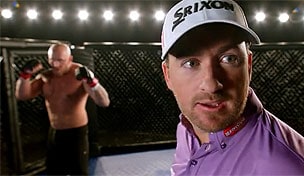 Getty Images
FT. WORTH, TX - MAY 28: Phil Mickelson watches a shot on the 11th hole during the second round of the 2010 Crowne Plaza Invitational at the Colonial Country Club on May 28, 2010 in Ft. Worth, Texas (Photo by Scott Halleran/Getty Images)  -

Wondering what Graeme McDowell has been up to in the 10 weeks since he last played a tournament?

Apparently, he was getting body-slammed by a UFC fighter.

G-Mac tweeted a new Srixon commercial with Peter Jacobsen that shows him getting tossed in a steel cage by a mixed martial arts expert.

That just because McDowell says he has taken a few karate lessons, he’s not ready for the Octagon – just like you, the average golfer, probably shouldn’t use a Tour-caliber golf ball. Srixon’s new Q-Star is a ball engineered for the average golfer.

Take a look at the video here: