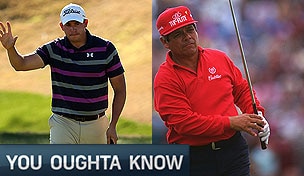 LA QUINTA, Calif. – Here is what You Oughta Know heading into the final round of the Humana Challenge:

• Scott Stallings’ five-shot lead over five players ties the tournament record (when the event is 72 holes). But a word of caution: Last year, seven players rallied from six or more strokes back in the final round to win.

• Stallings is the only player in the field without a bogey through 54 holes. If he can maintain that tidy form through Sunday, he would become the first player since Lee Trevino in 1974 to win a 72-hole tournament without dropping a shot.

• A victory Sunday by Stallings would mean that the first three winners on the 2013 PGA Tour were all in their 20s. The last time that happened: 1977 (Jerry Pate, Bruce Lietzke, Tom Watson).

• Of the five players in a tie for second, Stewart Cink might be the most desperate for a high finish. He hasn’t won a Tour event since the 2009 British Open. That was also his last top-5 finish.

• Second-year Tour player Roberto Castro, whose best career finish is a T-5 at the Puerto Rico Open, is aiming to become the eighth first-time Tour winner at the Humana Challenge, and the fifth in the last seven years.

• Coming off a T-5 last week at the Sony Open, Brian Stuard (currently T-7) played his way into contention Sunday with a 10-under 62 on the Nicklaus Course. But it could have been better. Needing a birdie-birdie finish to shoot 59, Stuard missed a 10-foot birdie putt on the 17th hole, then yanked his approach on the final hole and wound up making bogey. Nonetheless, his 62 was the low round of the week.

• Russell Henley’s magical run finally came to an end Saturday. Though the Sony Open winner made the cut, he fell out of contention with a 1-under 71 that has him at T-43 heading into Sunday’s finale.