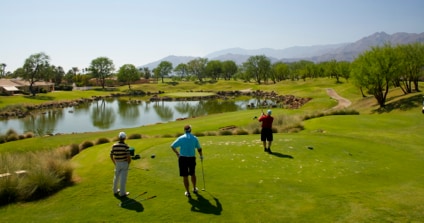 But it's front and center for the amateurs as the most feared course of four in the rotation at this week's Golf Channel Am Tour Senior National Championships.

The good and bad news for the Sarazen flight (93 golfers between 12-16 handicaps) is that their first round would be on the Stadium. And perhaps the signature hole of the event is the par-3 17th, an island green akin to the 17th at the TPC Sawgrass. Escape 'Alcatraz' on Day 1, and it might be the difference come the final round on Wednesday and the top prize in your flight.

The 17th, according to SkyCaddie, was playing 142 yards to the stick, slightly downhill with a little breeze in the face.

Based on the 90 minutes or so I spent at the 17th Sunday morning, if you hit the green and escaped with a par, you were in the minority. Of the threesomes hitting, the average was at least two shots in the water (or a few found the bunker short-left), followed by a delicate little pitch from the drop zone about 60 yards away.

'That'll make up for the nine on the last hole,' quipped Ted Glarner as his tee shot found the green within about 15 feet. Unfortunately, his playing partner, Jamie Sansom, kept the group's nine streak alive with three water balls en route to his own nuevo.

'Glad that's over…' Sansom smirked walking off the green. But Sansom was able to regroup for a bogey on the 18th, a bogey that would actually make up ground on the field. The finishing hole played 2.02 strokes over par Sunday.

While the 17th may be one of the more intimidating shots on the course, there is no real 'breather' hole on the Stadium. You can't run the ball up onto any greens here, each of which is heavily-guarded with trouble.

While the 18th, a long, dogleg left around water that is very similar to the TPC Sawgrass' finisher, played toughest, the 17th proved to be the 11th toughest hole this morning and not even the toughest par 3, that was the 13th hole, a longer 170-plus yard shot to a green guarded by water left and mounds and bunkering right.

Two birdies were managed on Alcatraz, scored by Vic Okler from Baldwin, Missouri and David Spalasso from Castro Valley, California. Leaders in the clubhouse after day one for the Sarazen group were Dave Verhulst and Peter Kan Hou, both firing 81s.

No aces on the 17th, yet. The Championship and Palmer flights will take on the Stadium Monday.

Jamie Sansom takes a crack at Alcatraz on Sunday in the Golf Channel Am Tour Senior National Championships.