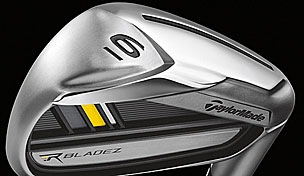 Getty Images
PONTE VEDRA BEACH, FL - MAY 08: Adam Scott of Australia reacts to his missed putt on the 11th hole during the second round of THE PLAYERS Championship on THE PLAYERS Stadium Course at TPC Sawgrass on May 8, 2009 in Ponte Vedra Beach, Florida. (Photo by Richard Heathcote/Getty Images)  -

According to TaylorMade technicians, the key feature of the new RocketBladez irons is the so-called Speed Pocket. A 2 millimeter-wide slot in the sole of the clubs from 3- to 7-iron, it is designed to flex and rebound at impact to promote faster ball speed, higher launch angles and stronger ball flight – even on hits made low on the clubface, which is where a majority of recreational players miss.

Company officials say the new irons were inspired by the distance-enhancing technology behind the successful RocketBallz fairway metals, and CEO Mark King is so enthralled with the introduction that he describes RocketBladez as a “once-in-a-lifetime innovation” in the iron category and avers: “If your iron does not have a Speed Pocket, your iron is outdated.”

TaylorMade officials say the Speed Pocket is filled with specially formulated polyurethane developed by 3M that quiets vibration without significantly slowing or inhibiting the flex of the feature as it also keeps debris out.

The clubface is made of maraging stainless steel and incorporates the company’s newest iteration of Inverted Cone Technology, which is designed to deliver two primary benefits: an increase in the size of the clubface area that delivers high ball speed and an improvement in the control of the angle of the ball as it leaves the clubface, for straighter shots and tighter dispersion.

Finally, TaylorMade engineers say they found a way to fine-tune the Center of Gravity in the RocketBladez to a low and “absolutely centered” location on the face by redistributing weight it took from the top of the club, as well as the hosel (which was shortened), to strategic areas within the clubhead. That is designed to make it easier for players to find the sweet spot, which theoretically allows them to maximize energy transfer for higher launch and maximum distance.

RocketBladez irons are available at retail as of the week of Dec. 3, while a Tour version of the product, in which the clubface is designed to be void of “hotspots” often found in other distance irons to ensure consistent distance, will be released in February.