Confident Reed: I'm a top-5 player in the world 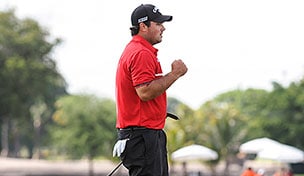 Getty Images
HUMBLE, TX - APRIL 02: Jordan Spieth of the United States hits his tee shot on the second hole during the third round of the Shell Houston Open at the Golf Club of Houston on April 2, 2016 in Humble, Texas. (Photo by Stacy Revere/Getty Images)
-

Patrick Reed was rightfully brimming with confidence when he stepped off the 18th green Sunday at Doral, where the 23-year-old captured his third PGA Tour title since August and became the youngest winner of a World Golf Championships event.

Earlier in the day, NBC ran a sit-down interview with Reed, who said that he believes he is a top-5 player in the world. He was asked about that comment again in the wake of his one-stroke victory over Bubba Watson and Jamie Donaldson.

Reed's response, in its entirety:

“I’ve worked so hard, I’ve won a lot in my junior career, did great things in (my) amateur career, was 6-0 in match play in NCAAs, won NCAAs two years in a row, got third individually one year, and now I have three wins out here on the PGA Tour.

“I just don’t see a lot of guys that have done that, besides Tiger Woods, of course, and, you know, the other legends of the game. It’s just one of those things, I believe in myself and – especially with how hard I’ve worked – I’m one of the top five players in the world.

That top-5 comment predictably blew up on social media, and some fans criticized Reed – who is expected to rise to No. 20 in the world – as either delusional, disrespectful or cocky, perhaps a combination of all three. After all, he has never even played in a major.

In his winner’s news conference Sunday night, Reed was asked which other players round out his personal top 5. Off the top of his head, he listed Tiger Woods, Phil Mickelson, Graeme McDowell and Dustin Johnson.

What’s indisputable is this: Reed joined Tiger Woods, Phil Mickelson, Sergio Garcia and Rory McIlroy as the only PGA Tour players who have won three or more times before turning 24 years old.