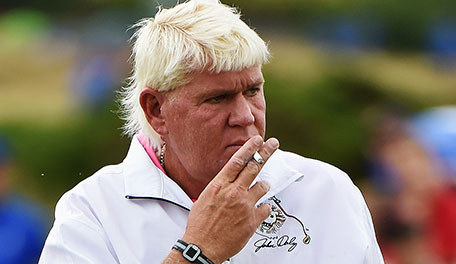 Days after an on-course collapse sent him to the hospital, John Daly explained his recent health scare and was even able to make light of what appeared to be a serious situation.

Speaking to SiriusXM PGA Tour radio Tuesday, Daly recounted the events surrounding his collapse over the weekend on a Mississippi course and subsequent diagnosis of a collapsed lung.

"I’m walking off with my buddy Will and next thing I know, it’s like kinda one of those buddy-buddy things, you’ve got your arm around him, and next thing I know he just told me I just fell straight over," Daly said. "Next thing I knew a nurse was talking to me. They did mouth-to-mouth and everything. I was probably gone for at least, I don’t know how long."

Daly, 49, explained that the condition stems from a rib injury that he has dealt with since 2007. While doctors originally speculated that the heavy smoker may have had a cardiac episode, Daly put those rumors to bed.

"They thought I had a heart attack," he said. "But I only smoke two packs of cigarettes a day, not three, so I'll be alright."

Daly last competed at the PGA Championship, and while he teed it up the day after his collapse he expects the injury to sideline him from tournament play for at least the next 3-4 weeks. He targets a return at the European Tour's Alfred Dunhill Links Championship, but in the interim Daly rebounded enough to offer a full-throated rendition of "Knockin' on Heaven's Door" during a charity event Tuesday night.