Golf bodies: Trump comments ‘do not reflect’ our views 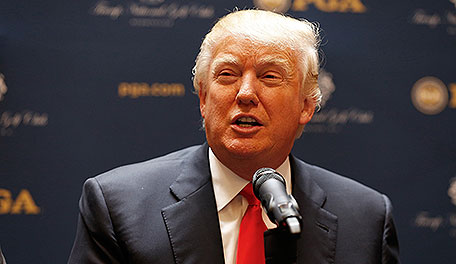 Donald Trump said he hasn’t heard anything negative from the golf industry after making derogatory remarks about Mexican immigrants.

That changed Wednesday, when the PGA Tour, LPGA, PGA of America and USGA issued a joint statement saying the comments made by the businessman-turned-Republican presidential candidate are “inconsistent with our strong commitment to an inclusive and welcoming environment in the game of golf.”

Trump owns courses that have ties to every major golf organization. Two of his courses host PGA Tour events, including Trump National Doral in Miami, which stages a World Golf Championships event.

“I’ve had tremendous support from the golf world, because they all know I’m right,” Trump told Golf Channel insider Tim Rosaforte on Tuesday night. “I’ve been great to golf. I’ve been investing while everybody else was fleeing.”

The PGA Tour and PGA of America initially declined comment for Rosaforte’s report, but on Wednesday afternoon the four organizations issued a joint statement.

“In response to Mr. Trump’s comments about the golf industry ‘knowing he is right’ in regards to his recent statements about Mexican immigrants, we feel compelled to clarify that those remarks do not reflect the views of our organizations,” the statement read.

“While the LPGA, PGA of America, PGA Tour and USGA do not usually comment on Presidential politics, Mr. Trump’s comments are inconsistent with our strong commitment to an inclusive and welcoming environment in the game of golf.”

The four organizations are merely the latest to speak out against Trump, who made disparaging comments about Mexican immigrants during his presidential announcement speech. Macy’s, Univision and NBCUniversal all have severed ties with Trump this week.