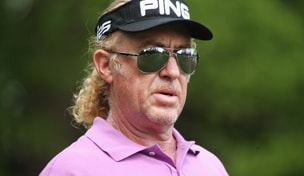 Jimenez, the cigar-smoking, wine-drinking Spanish pro who finished fourth in the Masters last week, shot a final-round 67 to finish at 14-under 202, two shots ahead of Bernhard Langer at TPC Sugarloaf in Duluth, Ga.

Jimenez, 50, became the 18th player to win in his Champions Tour debut - and the second player in a row; Jeff Maggert won the tour's last event in Saucier, Miss., on March 23.

Jimenez went wire to wire, taking the lead with a tournament-record 65 in the first round, followed with a 70 on Saturday before closing with a 67.

Jay Haas closed with 67 to finish third, one shot ahead of Fred Couples (70). 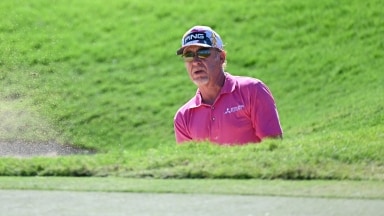 Miguel Angel Jimenez made a 12-foot birdie putt on the second hole of a playoff Saturday with senior newcomer Ernie Els to win the Mitsubishi Electric Championship.