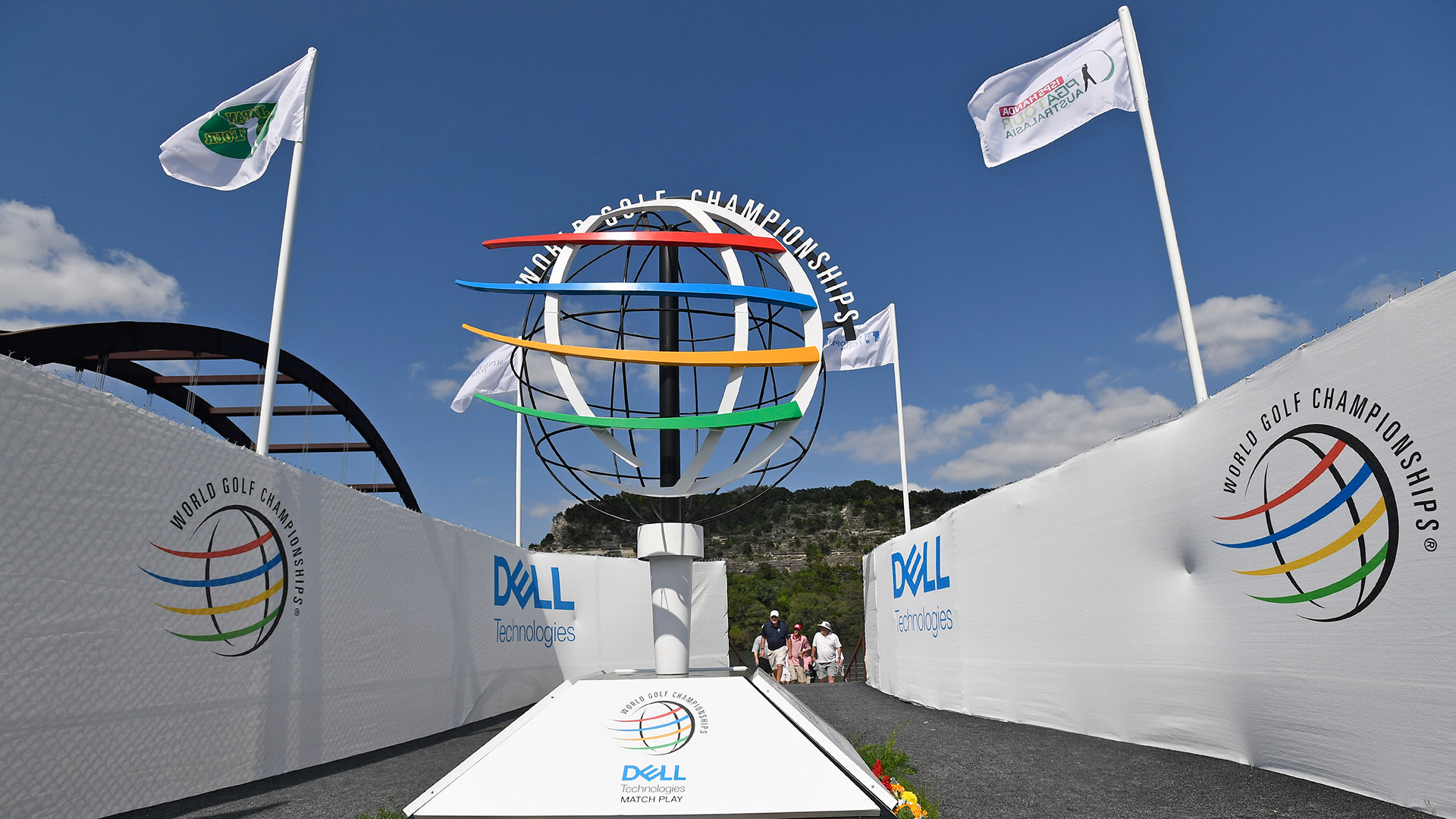 Here is how things played out on Day 1 of the WGC-Dell Technologies Match Play, as 64 players take on Austin Country Club with hopes of advancing out of pool play:

Group 1: (52) Bernd Wiesberger def. (1) Dustin Johnson, 3 and 1: Down goes the defending champ. Johnson never trailed in any match en route to victory last year, and he won five holes against Wiesberger. But that wasn't enough as the Austrian turned an all-square affair into an upset victory by winning three straight from Nos. 15-17.

Group 1: (32) Kevin Kisner vs. (38) Adam Hadwin, halved: This was a tight one throughout, as neither player held more than a 1-up lead. Kisner held a lead for much of the back nine, but Hadwin birdied the 17th to draw even and the match was halved when they both made par on the final hole.

Group 2: (2) Justin Thomas def. (60) Luke List, 2 up: In perhaps the most entertaining match of the morning, Thomas edged List in a rematch of last month's Honda Classic playoff despite List spending much of the round putting with a wedge after bending his putter. Thomas was 3 up with four to play before List pushed the match the distance.

Group 2: (21) Francesco Molinari def. (48) Patton Kizzire, 3 and 1: Molinari turned a tight match into a victory thanks to a few timely errors from Kizzire. Pars on Nos. 14 and 17 were good enough to win the hole for Molinari, with the latter sealing his victory and moving him a step closer to a potential winner-take-all battle with Thomas on Friday.

Group 3: (3) Jon Rahm vs. (63) Keegan Bradley, halved: Rahm was a runner-up at this event last year, but he got all he could handle from one of the last men in the field. Bradley was 2 up with three holes to play, but bogeys on two of the final three holes opened the door for the Spaniard to escape with a draw.

Group 3: (28) Kiradech Aphibarnrat def. (43) Chez Reavie, 3 and 2: Aphibarnrat took the lead in his group with a victory over Reavie during which he never trailed. The globetrotting Thai held a 2-up lead at the turn and closed things out with a birdie on No. 16. Reavie won only two holes all day.

Group 4: (4) Jordan Spieth def. (49) Charl Schwartzel, 2 and 1: The top seed in the group scored an early point in a battle between former Masters champs. Spieth never trailed and took control of the match with three straight wins on Nos. 12-14.

Group 4: (19) Patrick Reed def. (34) Haotong Li, 3 and 2: Reed's much-anticipated match with Spieth is still two days away, but he dispatched of Li in his opener by winning the opening hole and never trailing the rest of the way. Li got to within one of Reed after 10 holes but the American won three of the next five to separate.

Group 5: (5) Hideki Matsuyama def. (53) Yusaku Miyazato, 2 and 1: This all-Japanese battle went to the group's top seed, as Matsuyama poured in a birdie on the par-3 17th to close out the match. Miyazato got off to a strong start, holding a 2-up lead through six holes, before Matsuyama turned the tables with two birdies over the next three holes.

Group 5: (46) Cameron Smith def. (30) Patrick Cantlay, 2 up: Smith never trailed in the match, but it turned into a closer contest than it appeared when the Aussie held a 3-up lead with four holes to play. Uihlein won the next two holes, but he couldn't get any closer as Smith earned a critical victory as he looks to earn a Masters spot by staying in the top 50 in the world rankings after this week.

Group 6: (57) Peter Uihlein def. (6) Rory McIlroy, 2 and 1: McIlroy won last week at Bay Hill, but he's now playing catch up after a decisive loss to Uihlein. The American held a 5-up lead before McIlroy reeled off five straight birdies to cut the lead to 2-up, but a par from Uihlein on the 17th hole sealed the upset.

Group 6: (18) Brian Harman vs. (44) Jhonattan Vegas, halved: This was a tight match throughout, with Harman clinging to a 1-up lead for most of the back nine. But Vegas rolled in a birdie putt on the final green to salvage half a point, much to the delight of the Austin galleries who were out supporting the former Longhorn.

Group 7: (7) Sergio Garcia def. (62) Shubankhar Sharma, 1 up: Garcia and Sharma took turns leading this match throughout the day, with the Indian holding a 1-up advantage through 13 holes. But Garcia won the next hole to square the match, then earned a full point with a birdie on the 18th hole in his first competitive start since becoming a father last week.

Group 7: (20) Xander Schauffele def. (41) Dylan Frittelli, 1 up: The reigning PGA Tour Rookie of the Year got the best of the former Longhorn in a tight match that went the distance. Schauffele led for much of the afternoon before Frittelli drew level with wins on Nos. 14 and 15. But Schauffele won the next hole and held on from there.

Group 8: (25) Louis Oosthuizen def. (42) Jason Dufner, 1 up: Oosthuizen appeared poised for an easy point before Dufner rallied with three straight wins on Nos. 14-16 to square the match. But Oosthuizen regained a lead with a par on No. 17 and held on for a hard-fought victory.

Group 9: (58) Ian Poulter def. (9) Tommy Fleetwood, 3 and 2: The match between Englishman went to the veteran, as Poulter took his putter from the 2012 Ryder Cup out of the closet and put it to quick use. Fleetwood won only two holes during the match, none after the eighth hole, and he now faces the prospect of early elimination as the group's top seed.

Group 9: (33) Kevin Chappell def. (26) Daniel Berger, 3 and 2: Chappell and Berger were Presidents Cup teammates in the fall, but the opener went to Chappell. Berger won the 13th hole to draw all square, but Chappell reeled off three straight birdies on Nos. 14-16 in response to close out the match.

Group 10: (10) Paul Casey def. (51) Russell Henley, 1 up: Casey is making his first start since winning at Innisbrook, and he scored an early point after rallying back against Henley. The Englishman didn't lead in the match until the final hole, when Henley's tee shot found the hazard leading to an ill-timed concession.

Group 10: (45) Kyle Stanley def. (31) Matthew Fitzpatrick, 1 up: Stanley is making his first match play appearance since 2012, and he got off to a promising start by edging the Englishman. Fitzpatrick was 2 up with five holes to go, but Stanley won three holes the rest of the way including a birdie on the 18th hole to secure a full point.

Group 11: (64) Julian Suri def. (11) Marc Leishman, 3 and 2: Suri was the last man to get into the field following the withdrawal of Joost Luiten, but he's already on the board with an early point. Suri won each of the first two holes and never trailed in the match, closing out Leishman with a birdie on the par-5 16th.

Group 11: (35) Bubba Watson def. (23) Branden Grace, 5 and 3: Watson was absolutely unstoppable in the biggest rout of the day. The two-time Masters champ made seven birdies over his first nine holes, making the turn with a 6-up advantage. Grace never stood a chance.

Group 12: (12) Tyrrell Hatton def. (55) Alexander Levy, 3 and 2: Hatton won the opening hole with a par and never trailed the rest of the way. Levy's win on the eighth hole proved to be his only victory of the day, as Hatton barely had to break a sweat after building a 3-up lead through five holes.

Group 12: (36) Brendan Steele def. (22) Charley Hoffman, 1 up: Steele never trailed in the match and at one point held a 4-up lead, but coming down the stretch it took everything he had to keep Hoffman at bay. Hoffman won four in a five-hole stretch from Nos. 13-17, but a par on the final hole was enough to give Steele the full point.

Group 13: (13) Alex Noren def. (61) Kevin Na, 4 and 2: Noren has come close to winning a few times already this year in the U.S., and he improved his career record in Austin to 5-1 thanks to a steady back nine. The match was all square through 11 holes before Noren took three of the next four, closing things out when Na conceded on No. 16.

Group 13: (29) Tony Finau def. (39) Thomas Pieters, 2 and 1: Two of the longest hitters in the field squared off in this tilt, with Finau notching a full point despite losing two of the first three holes. The American birdied the 15th to take a 2-up lead, then closed out Pieters with a par on the 17th hole.

Group 14: (59) Charles Howell III def. (14) Phil Mickelson, 3 and 2: Mickelson is making his first start since his WGC win in Mexico, but he's now on the ropes after Howell put together a strong back nine that included three birdies in a four-hole stretch from Nos. 10-13 to take control of the match.

Group 14: (17) Rafael Cabrera-Bello def. (40) Satoshi Kodaira, 2 and 1: Cabrera-Bello made a run to the semifinals at this event two years ago, and he's off to another good start following a match in which he never trailed and lost only three holes. With the match tied through 11 holes, Cabrera-Bello's birdies on Nos. 12 and 13 proved pivotal.

Group 15: (15) Pat Perez vs. (50) Si Woo Kim, halved: The first match of the day ended up in a draw, as the top seed rallied from a deficit to salvage half a point. Kim won three of the first six holes and held a 3-up lead with seven holes to go, but Perez fought back with four birdies over the next six holes to draw even.

Group 15: (24) Gary Woodland vs. (37) Webb Simpson, halved: This group remains entirely up for grabs since nothing was decided on the opening day. Woodland took a 3-up lead at the turn, but Simpson rallied by winning four of the next seven holes, including a birdie on No. 17 that brought him back to all square for the first time since the third hole.

Group 16: (16) Matt Kuchar vs. (54) Zach Johnson, halved: This draw likely felt like a victory for Johnson, who was facing a 4-down deficit with four holes to play before closing with four straight birdies to steal half a point.

Group 16: (47) Yuta Ikeda def. (27) Ross Fisher, 2 and 1: Ikeda now holds the top spot in the group after ousting Fisher, who made the quarterfinals last year. Ikeda squared the match with wins on Nos. 6 and 7 before a pivotal birdie on No. 15 gave him a 2-up lead he would not relinquish. 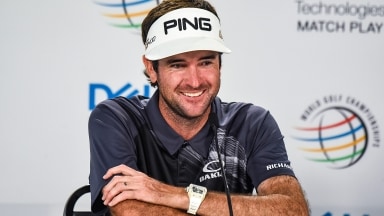 With the Masters, which he has already won twice, just around the corner, Match Play champion Bubba Watson has transformed himself and his game. 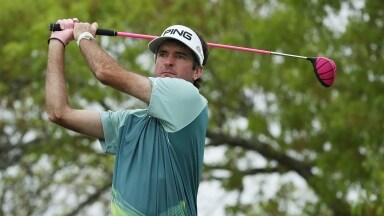 Bubba Watson rolled over Kevin Kisner, 7 and 6, in the finals of the WGC-Dell Technologies Match Play. Here's a look inside the winners' bag. 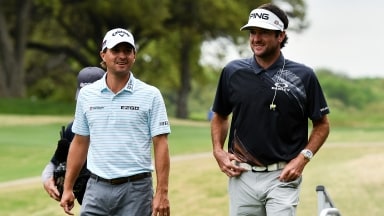 Bubba Watson dominated the finals of the WGC-Dell Technologies Match Play and earned his second win of the season. Here's how the purse was paid out in Austin, Texas.