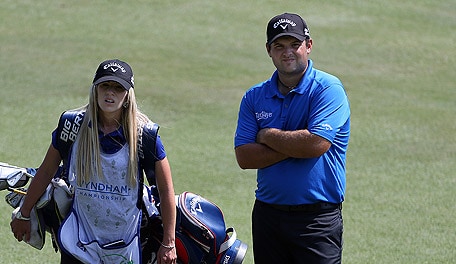 Patrick Reed's wife, Justine, was hospitalized after having a grand mal seizure on Tuesday at the Ritz-Carlton Golf Resort in Naples, Fla.

Patrick Reed withdrew from Wednesday's second day of the pro-am in the Franklin Templeton Shootout, but has not withdrawn from the tournament, which begins Thursday.

"I withdrew from today's pro-am to be with my wife, Justine, who suffered a grand mal seizure (Tuesday) afternoon while in the bathtub," Reed said in a statement. "We are really fortunate that she is OK and lucky that I was in the room with her to save her from drowning. I am so grateful to the paramedic team, IMG and the doctors at Naples Community Hospital for their support and care during an extremely difficult time."

Justine Reed was scheduled to caddie for her husband this week, as she has often done in the past.

According to the Mayo Clinic, a grand mal seizure features a loss of consciousness and violent muscle contractions. It's the type of seizure most people picture when they think about seizures in general.

The Reeds have a daughter, Windsor-Wells, who was born in May.

Update: Reed said after his round Thursday that Justine is doing fine and just needs to eat and rest.

"It was good to be back out competing, but the main thing is I can't wait to get back up to the room to see how Justine's doing," Reed said.