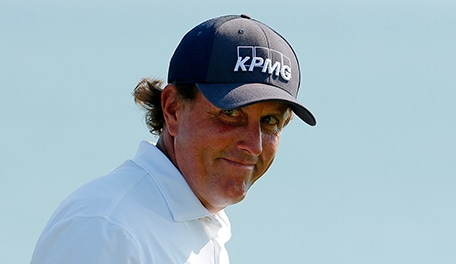 Phil Mickelson has reportedly been excluded from further work on the redesign of the North Course at Torrey Pines, three years after he first offered a new vision for the layout that annually co-hosts the Farmers Insurance Open.

According to a San Diego Union-Tribune report, Mickelson is out of the running because of a ruling from the California Fair Political Practices Commission that reads in part, "any person or company that worked on preliminary designs may not participate in the design and/or construction resulting from this Request for Proposal and the ensuing contract."

Mickelson, a native of San Diego, first offered a preliminary plan for the course in February 2012. While his Phil Mickelson Design group expected to submit a formal construction bid to the city of San Diego alongside Landscapes Unlimited, the latter will reportedly now submit its own bid without Mickelson.

"I'm deeply disappointed with this entire process," Mickelson said in a release. "We did a lot of good work, we had overwhelming support from the residents of San Diego on this project and now we're disqualified from bidding on it."

Mickelson's original plans included re-contoured fairways, redesigned greens, an emphasis on introducing more natural grasses and a desire to bring the canyon lines part of the course more into play. But the redesign has been delayed as construction budgets skyrocketed, with Mickelson's original budget projection more than tripled by more recent construction estimates.

After a temporary postponement of plans last year, the city now hopes to find the construction group that can do the most work within its current budget of $12.6 million.

"My vision was to make Torrey Pines North more environmentally stable, more enjoyable for amateurs of all abilities, more challenging for PGA Tour players and we were planning to do it for less than $6 million," Mickelson said. "The city and golf division's $12.6 million budget is far higher than we expected or intended. It really is unfortunate. San Diegans and visitors deserve a better North Course, but they don't need or want one that costs as much as this will."

Once a construction bid is finalized, redesign efforts are expected to begin in February after the Farmers Insurance Open concludes.