No birdies on St. Andrews' famed Road Hole in Rd. 1 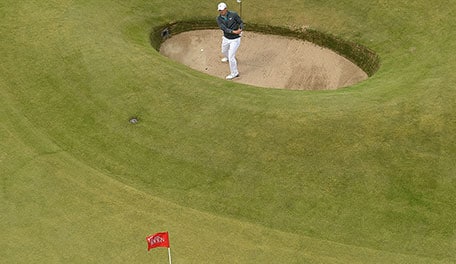 No birdies there today, he was told.

“I saw some in the group behind me,” he said, pausing for effect.

Yeah, that must have felt like a birdie in the opening round. The Road Hole played to a scoring average of 4.833 – the most difficult hole since the Open began keeping the statistic in 1982.

Many factors were involved, but the biggest problems at 17 were this: (1) The wind switched midway through the round and turned back into the players and from the left, making the brutal 495-yard hole play even longer, and (2) the hole location was unnecessarily difficult, cut only nine paces from the left and 37 deep – or just over the treacherous Road Hole Bunker.

“You purposely try and miss the green on the second shot,” said Jordan Spieth, who made bogey after finding the bunker. “There’s almost no other way around it. That kind of takes away the point of the hole, but at the same time, it’s the Road Hole at St. Andrews, and today’s pin position is really the only time you can’t really play the hole.”

“They’ve not been very friendly with that one,” Tommy Fleetwood said.

Johnson mis-hit his drive and, like many in the field, had a fairway wood for his second shot. He actually hit his target with his 3-wood approach, the ball chasing up and onto the right part of the green, but it caught the slope and funneled back off the front of the putting surface. He opted for a skip-and-check wedge through the fringe left of the hole, but he missed the 10-footer for par.

“I’m hitting 7-irons in there in the practice round,” he said. “It’s substantially harder.”