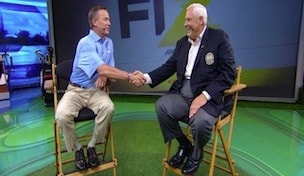 • Rory McIlroy: If you could copy one golf swing, this is the one. McIlroy creates a great triangle with his arms and shoulders at setup, and he keeps it intact well into the backswing, which creates a lot of width. At the top, he has tremendous shoulder turn, which allows him to create great power without going past parallel. His lead arm is also parallel to the shaft plane line, which is key to having a repeatable golf swing. His real power comes from the downswing, where his lower body leads the way. Despite his size, McIlroy is one of the longest hitters in the game because of the squat position and how quickly he unwinds his hips in the downswing.

• Tiger Woods: Since 2009, Tiger has added more spine tilt at address, which causes the club to work more to the inside close to his thigh in the takeaway. This creates less forearm rotation and a better swing plane. Because Sean Foley has Tiger trying to hit a slight fade, the swing is a little more vertical with the club getting out in front in the downswing with much more body rotation.

• Luke Donald: Donald has been the top-ranked putter on the PGA Tour the past three seasons for good reason, and his putting stroke is definitely worth trying to learn from. Donald keeps the putter head low to the ground in the takeaway, but through impact it rises up. My favorite part of his putting stroke is after he strikes the ball, which is consistently in the center of the putter face, he releases the toe of the putter. Both of these aspects are key to getting a true roll on the ball. Youll also notice he has a little bit more follow through than he does backswing, somewhere around a one to one-and-a-half ratio. This is a ratio you should try to follow no matter the distance of the putt.

For more The Golf Fix content visit the showpage.

In determination. In achievement. In scandal. In iconography. There are few people who can relate to Tiger Woods. Woods and the world lost one of them Sunday in Kobe Bryant.

Tiger Woods finished inside the top 10 at Torrey Pines, where news of Kobe Bryant's death overshadowed the play on the course.