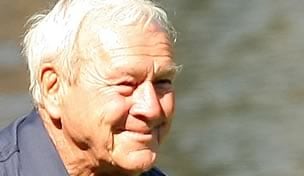 Getty Images
KAPALUA, HI - OCTOBER 19: Laura Diaz tees off the 3rd hole during the final round of the Kapalua LPGA Classic on October 19, 2008 at the Bay Course in Kapalua, Maui, Hawaii. (Photo by Donald Miralle/Getty Images)  -

One of the most entertaining events of the year takes place starting today, the PNC Father/Son Challenge in Orlando, Florida.  This event is not just limited to fathers and sons as some of the legends of the game actually team up with their daughters and grandsons.

This 18-team field made up of players that have a combined 492 professional wins on the PGA and European Tours, including 67 major championships.  The field consists of teams of two competing in a scramble format over 18 holes for a $1 million purse.

A few of the teams include Arnold Palmer and his grandson, Will; Jack Nicklaus and his son Gary Nicklaus; Fuzzy Zoeller and his daughter Gretchen; Larry Nelson and son John; Bernhard Langer and his daughter Christina and Nick Faldo with his son Matthew to name a few.