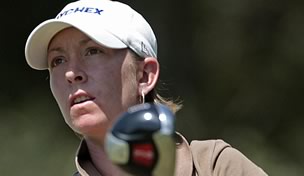 Danielle Downey, a former LPGA player and the current director of operations for the Auburn golf team, was killed in a single-car crash Thursday in Auburn.

“I’m absolutely devastated,” Auburn women’s coach Kim Evans said in a release. “Danielle meant so much to me, the girls and this program. Not only did she give much of her life to Auburn as a student-athlete and as a mentor to these young women, but she was so instrumental to the team during some tough times over the past year. Danielle was like a daughter to me.”

Last season, Downey, 33, filled in for Evans, who was diagnosed with ovarian cancer. The Tigers earned a place in the NCAA Championship and finished sixth, their best result in eight years.

Downey was in her second season serving as the director of operations after returning to Auburn to complete her degree. She graduated in May 2013 with her degree in health promotion.

After her college career, Downey played on both the LPGA (2006-2010) and Futures tours.

“The LPGA Tour is deeply saddened about the passing of long-time member and friend Danielle Downey,” the LPGA said in a release. “Please keep Danielle’s family and friends in your thoughts and prayers during this very difficult time.”

“This is a tragic and devastating loss for Danielle’s family, our student-athletes and staff, and the entire Auburn family,” said Jay Jacobs, Auburn’s athletic director. “Danielle cared deeply about people and she was loved by all who knew her. She impacted a lot of lives here as a player and a member of our staff. She will be dearly missed.”