Reed on wife-caddie: 'We don't plan on stopping' 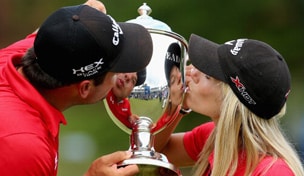 Getty Images
PEBBLE BEACH, CA - JUNE 15: Rafael Echenique of Argentina hits a shot during a practice round prior to the start of the 110th U.S. Open at Pebble Beach Golf Links on June 15, 2010 in Pebble Beach, California. (Photo by Ross Kinnaird/Getty Images)  -

Last week, Patrick and Justine Reed became the first husband-and-wife team to win on the PGA Tour in more than 17 years.

The trial run for their player-caddie partnership came in spring 2012, during a Monday qualifier in Houston. It was 100-something degrees outside, and Reed overstuffed his staff bag with water bottles and rain gear that pushed the weight to about 50 pounds. “I made it the heaviest I could to see if she could do it,” he said.

Turns out Reed was the one who struggled in the humid conditions, while Justine (just 5-foot-1), he said, “was like she was still on the first hole, still energized and ready to go.”

“I knew at that point this is going to work,” he recalled Tuesday at The Barclays, just two days after winning the Wyndham Championship in a playoff. “We don’t plan on stopping any time soon.”

Justine Reed has two bachelor’s degrees, in nursing and health admission, and put her career on hold to tote the bag for her husband.

“I’m lucky,” said Reed, 23, who got married last December. “There’s not a lot of men that can say that out here. I’m just so lucky to have somebody like that, and she’s such a fierce competitor and she’s always so composed that it feeds on me.”