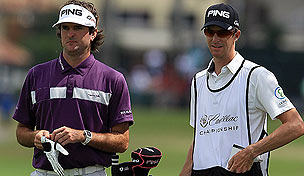 WHITE SULPHUR SPRINGS, W. Va. – Bubba Watson stood on the teebox at the par-3 15th hole during Wednesday’s pro-am for The Greenbrier Classic and asked caddie Ted Scott for a yardage.

“Can I trust that, Teddy?” Watson asked in a serious tone.

He then turned toward a few reporters and offered a smirk and a wink, Watson’s unspoken acknowledgment that he understands the maelstrom caused by his harsh words toward the caddie two weeks ago at the Travelers Championship, all of them captured on camera and audible through microphones.

With Watson holding a one-stroke lead on the par-3 16th hole, Scott called for his player to hit a 9-iron, which wound up in the water hazard short of the green. Watson scolded the caddie for his decision, a move that was largely viewed publicly as a player failing to shoulder the blame for an errant shot.

Watson and Scott, though, never saw it that way.

“In that heat of the moment, I might have gotten a little upset, but Teddy knows I love him,” said the 2012 Masters champion. “I have no disrespect toward him. It was a heat-of-the-moment thing.

“It’s funny, when we got to 17 tee, Teddy was like, ‘I’m so sorry. I’m so sorry.’ I was like, ‘Teddy, we can still birdie the last two holes and win this thing.’ … I was still in the moment, I was still trying to win the tournament and Teddy was a little shaken up, but that’s one of those things. We’re going to have good moments and bad moments. That one [was] a bad moment.”

“I wasn’t devastated because of anything that he said,” Scott added. “It was because he hit a perfect shot. I wanted him to hit a 9-iron and he hit it just like I wanted him to. For me, I felt like I ruined the tournament by getting him to hit a 9-iron. When he said I was disappointed on 17 tee, it wasn’t because of anything he said. It was because I chose a club that went in the water.”

Both maintained they were surprised at the traction this story gained in the hours and days following the final round.

“In that situation, it would be like LeBron James missing two free throws to win the championship,” compared Watson, who finished in fourth place. “He’s not going to be like, ‘Man, I can’t wait till next year.’ He’s going to be upset. I was upset, but if you talk to Teddy, I didn’t yell at Teddy. I said, ‘That club? That club.’ And then I yelled at myself for picking that club and staying with that club. We can always second-guess ourselves after the fact, but if I make par on that hole and win, nobody cares.”

While Watson spoke with reporters Wednesday, the caddie playfully intervened.

“What is this thing?” Scott asked incredulously while holding a yardage book.

“That is a yardage book, sir. You add numbers with that,” Watson replied. He then turned to a reporter and deadpanned, “We’re still working on his adding. His adding isn’t very good.”

So much for any lasting tension.

As for any long-term instability in their relationship, Watson and Scott confidently quashed that notion.

“We’re going to make mistakes,” added Scott. “I’ve done things to him that he doesn’t like; he does things to me. But that doesn’t mean I don’t like him. Just like any other family member. If you can’t treat your family bad, who can you treat bad?”

In fact, Scott believes that the situation wasn’t even all that unusual – other than the fact it was caught by cameras.

“The weirdest thing about it is that when you go back and look at it, it really wasn’t bad at all,” he said. “You see a lot worse out here. There are guys that go through it on every shot. He hardly ever says anything to me. It’s only every now and then. Unfortunately, it was caught on TV and the announcers made it a bigger deal.”

This week, Watson and Scott are together again. Still working as part of the same team. Still friends.

It’s been nearly eight years that they’ve been working together and it’s a relationship that has undergone some pretty major highs and lows.

Neither of them sees that changing anytime soon, although Watson acknowledged that if it does, it won’t be from his decision.

“Teddy loves me – and if he doesn’t, then he can quit anytime he wants,” he said. “So obviously I’m a good boss. … Obviously he likes me a little bit.”