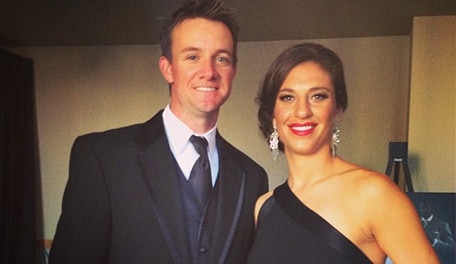 Carli Lloyd cast herself into American sports lore Sunday night at the Women’s World Cup. Turns out, the soccer star has a golf connection, too.

Lloyd is engaged to Brian Hollins, an assistant pro at Trenton Country Club in Ewing, N.J. Hollins and Lloyd are high school sweethearts who are set to get married after the 2016 Olympics in Rio, where Lloyd will be going for her third consecutive gold medal.

Lloyd scored three times in the first 16 minutes to lead the U.S. to a Women’s World Cup victory over Japan. She also scored the game-winning goals in both the 2008 and 2012 Olympic Games.

Hollins wasn’t on hand to witness his fiancé’s star-making moment Sunday in Canada, as he recently told the New York Post that Lloyd likes to be 100 percent focused on comeptition: “She doesn’t have to worry about me being in the stands, family being there, doesn’t have to worry about meeting up after the game. She can do her ice baths, prepare. She’s there to do business. We obviously understand. If it works, it works.”

Hollins has spent time playing on mini-tours and attempted to qualify for this year’s U.S. Open, where he made it through local qualifying. 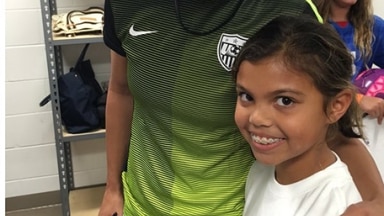 Tiger Woods' backyard soccer habits are well documented, but it looks like his daughter Sam is moving up in the world.