Arnie: The King and his army of fans 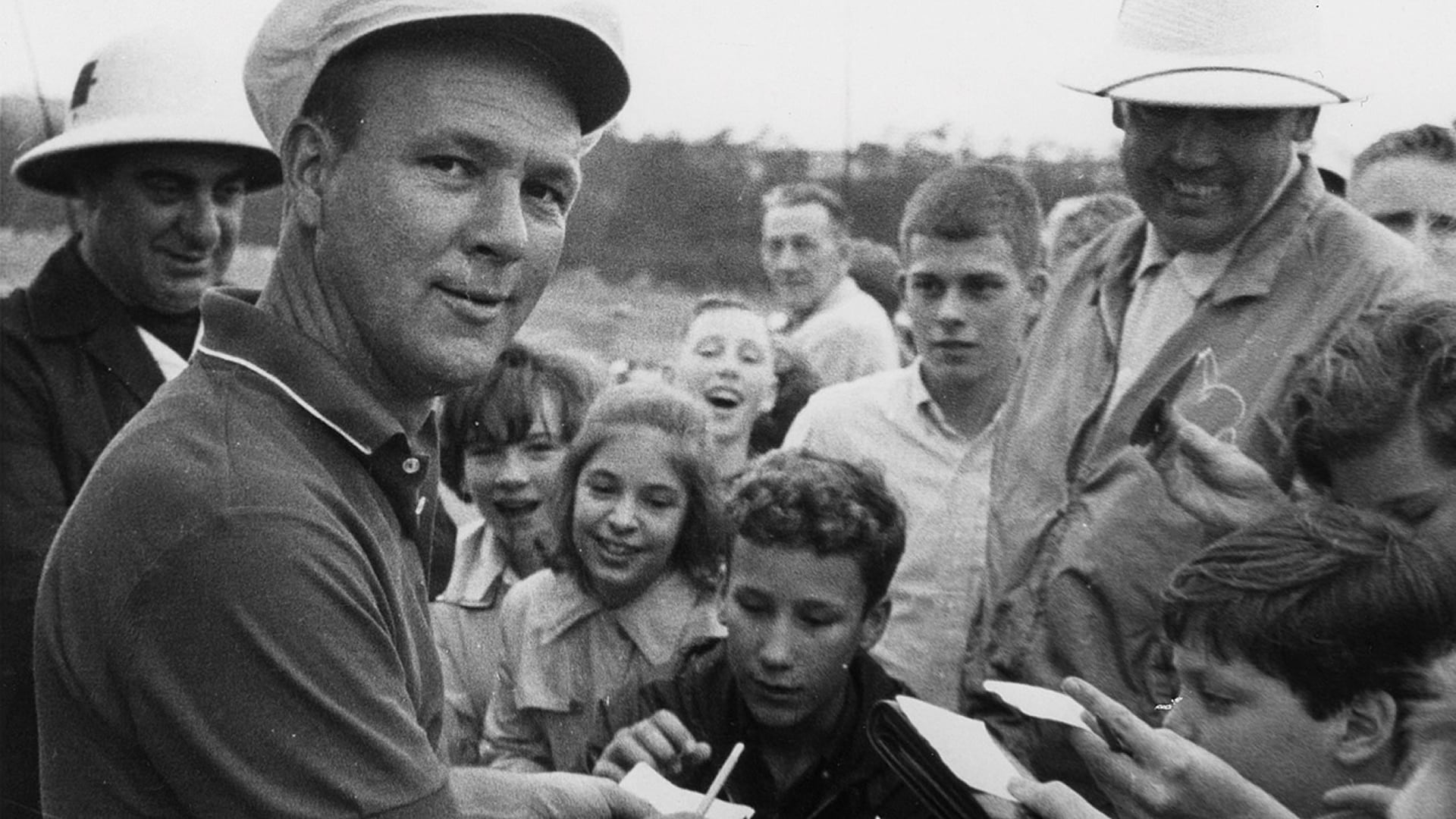 So, you want to know about Arnie’s Army? You want to know about the legion of fans that followed Arnold Palmer’s every action like he was the pied piper, hanging on his every movement and boisterously cheering each birdie with reckless adoration? Check the scrapbooks. From Latrobe to Luxembourg, there exist photos of wide-eyed devotees forgetting to mug for the camera, instead staring open-mouthed at their hero as he offers a knowing wink toward the lens.

All these years later, the sting has hardly worn off. He won seven career major championships, but the Green Jacket That Got Away was a product of his own accord. The most enduring memory of Arnie’s Army isn’t one that tugs on the heartstrings. It has nothing to do with Palmer being figuratively hoisted to victory by his legion of fans. Rather, it’s a story of his fans taking hold of him, swallowing him whole in the moment.

Palmer had birdied the 17th hole, giving him a one-stroke advantage over Gary Player with one hole remaining in his search for a third Masters title. He piped his drive down the 18th fairway, and then spotted a familiar face nearby.

“An old friend through the years had helped me a little with my putting and given me a little confidence in my game,” Palmer recalls decades later, a tinge of ruefulness still echoing through his voice. “He waved me over to the edge of the ropes. I made a mistake that my father taught me when I was a little boy not to ever do. He put out his hand and he says, ‘You won it, boy, great going.’ My mind left my body. Just went away. And I proceeded to, short story, make 6 on the last hole and lose the Masters. That was the saddest situation that I had here.”

Looking back on it, it’s easy to proclaim that he made a mistake. It’s simple to say he should have remained focused, finishing out the impending victory with a routine par. Then he could have glad-handed everybody within the Augusta city limits if he wanted.

That wasn’t Arnie, though. Not to condemn him for a lack of focus, because that wasn’t the case, but he saw himself as both a showman and a professional golfer. For as much as the fans idolized their conquering – and, sometimes, blundering – hero, he needed them even more.

When it comes to golf’s Big Three – those ubiquitous superstars whose appeal has crossed continents and generations – each holds a unique separation from the others. Jack Nicklaus is the one who owns the most major championships. Gary Player is the one who has the most frequent-fli er miles. Palmer? Well, he’s the one who’s signed the most autographs – and while there’s no counter attached to the right hand that has produced that distinctive signature over and over, it’s a good bet that the score really isn’t close.

Palmer has taken such pride in the fact that he not only signs more, but more legibly than anyone else, that stories of his insistence have become the stuff of legend.

Peter Jacobsen remembers taking part in an exhibition with him at Annandale Country Club in Los Angeles, back when he was still an ambitious young pro. It’s a story of how a casual interview session led to him being chastised by a man whom he revered.

“At one point, I signed a hat and handed it to Arnold,” Jacobsen has often retold. “He shoved it back in my face, and he said, ‘What is that?’ I said, ‘That's my autograph.’ He said, ‘I can't read it. That scribble may be OK on a check because your banker is not going to look at it, but if somebody wants you to sign a piece of memorabilia, you'd better be able to sign it so he can read it."

Palmer was strong before weight rooms existed. He was cool when Elvis Presley and Steve McQueen were cool. He was a sex symbol before those words could even be whispered on national television.

The fans came for those reasons, but they stayed for the golf.

He played the game as he lived his life. Aggressive, swashbuckling, emotional. It remains an iconic image, Palmer flicking his cigarette, steadying himself over the ball, hitching up his slacks and taking a mighty lash at the ball. He rarely got cheated on his swing. It was a strategy that didn’t always work, but did always endear him to the galleries.

“Well, I enjoyed the people, the fans that were coming out and rooting,” he explains. “I played to them as much as for them and I enjoyed that. I enjoyed getting in the thick of it and hearing them cheering me on and pushing me.” It was a two-way love affair spawned in the mid-20th century and spanning three generations. It was the type of dalliance that doesn’t exist any longer, in today’s age of message boards and haters and constant criticism. Palmer didn’t play golf in an era before pessimism; he just somehow rose above it.

He wasn’t just an idol to the fans, either. Palmer captivated fellow pros of all ages and talent levels. If the ticket-holders just wanted to catch a glimpse, the other players all wanted to hang around him.

Fuzzy Zoeller: “It’s how he treated people off the golf course. Classy act. Never, ever had a bad word to say about anybody.”

Dow Finsterwald: “It was eye contact. And then the thumbs up. They thought it was for them personally, just one and only.”

Tom Watson: “When I grew up, I was a member of Arnie's Army, and then Jack came along and beat Arnie, and I couldn't stand Jack.”

For many stars, the unending adulation gets old after a while. Away from the bright glare of the spotlight, behind the curtain of isolation, these stars will admit to needing private time. They will turn down an autograph request here, rebuff an appeal for a photograph there.

Nothing wrong with that, as celebrity shouldn’t overshadow the ability to live life without being confined to a bubble.

It’s just that Palmer has never seen it that way. Even now, at the age of 85, he signs for every autograph request, poses for every photograph appeal.

His grandson, Sam Saunders, agrees: “He truly loves his fans. It’s true. I’m not just saying that. He respects them. He loves them. And he knows that he wouldn’t be who he is without all of their support.”

There’s no way of knowing exactly how many times Palmer stepped toward the gallery ropes during a tournament round and exchanged pleasantries with members of his army. It was more than he can remember. It was enough that it wasn’t a pattern or a trend. It was just what he did.

Palmer led the Masters by a single stroke on the final hole and decided to shake hands with an old friend not because he lost focus or suffered an atypical brain cramp or even because he just made a mistake.

No, he shook hands with an old friend because that’s what he did. New friends, too. This scenario wasn’t an exception to the rule; it was the rule itself. He lost the Masters that day just by being himself, which is the very same reason he won so many other tournaments.

"I never thought for one minute that I wasn't going to win," he said after the round that day. "I had a one-shot lead, but I kind of forgot you have to finish."

Or perhaps for those few minutes, he simply forgot to stop being Arnold Palmer.